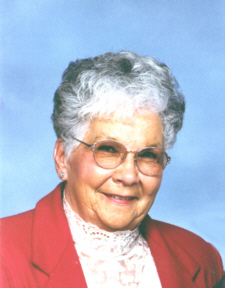 Genevieve L. Ousnamer, 80, formerly of W. 5D Road, Plymouth, passed away Sunday morning in the Catherine Kasper Life Center, Donaldson where she has made her home since January of 2006.
Genevieve was born on October 5, 1929, the daughter of Everett V. and Oma V. (Berger) Thornton in Lakeville, Indiana having lived in the area all of her life, she was a graduate of Lakeville High School in 1947.
On February 15, 1948 she became the bride of Jack J. Ousnamer and together they enjoyed the next 55 years together before his passing in 2003. Family was all important to the two of them enjoying every moment together and capturing nearly all in a vast collection of photo albums. They liked familiar surroundings and as a family spent over 25 years traveling to the same hotel in Myrtle Beach, SC.
A caring person to all, she spent special moments with grandchildren and many many hours as a Lutheran Braille Worker at the local Work Center within Calvary Lutheran Church of which she has held membership for over 50 years.
Outside the home, Gen worked with Frank Leachman as a bookkeeper at Local Finance. After which she worked for Norcen Insurance nearly 20 years and retired in 1994.
Her family consists of son, Robert D. and Carol A. Ousnamer of Casselberry, Florida and their children; Ben (Jade) Ousnamer, Jackie Ousnamer, Michael LaMott and Nikki LaMott. Daughter, Janet L. and Ken R. Houin of Plymouth and their children; Jeffery (Alinda) Houin, Christy (Bart) Sharp, Kurt Houin, and Lori (Travis) Smith. Daughter, Peggy S. and Mike A. Reynolds of Plymouth and daughter; Andrea Reynolds. Honorary daughter, Linda Ousnamer of Palmer Lake, Colorado. Ten great grandchildren and one on the way complete her immediate family today. A sister-in-law Jean Ann Thornton of Mishawaka and several nieces and nephews also survive.
She was preceded in death by her parents, spouse Jack and two brothers; Kenneth Thornton and Harold Thornton.
The family will receive friends from 3 – 7 p.m. on Wednesday, November 4th in the Johnson-Danielson Funeral Home, 1100 N. Michigan St., Plymouth. Calling will continue after 8:30 a.m. until time of services at 9:30 a.m. Thursday, November 5th in the Catherine Kasper Chapel on the Campus of Ancilla Domini located at 9601 Union Road, Donaldson, Indiana. Fr. Robert Bower of St. Nectarios Orthodox Church, South Bend will officiate.
Burial will follow in the New Oakhill Cemetery, Plymouth.
Memorial gifts may be made in Gen’s name to Operation Quiet Comfort c/o 17671 13th Road, Plymouth, Indiana 46563 or Catherine Kasper Life Center, 9601 Union Road, Donaldson, Indiana 46513