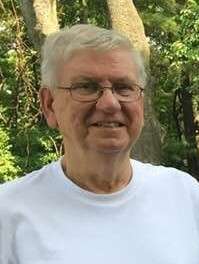 George D. â€œDaleâ€ Fansler Jr., 76, passed away in his home at 10 a.m. on Friday November 22, 2019.
Dale was born July 31st, 1943 to G. Dale and Kathryn (Horvath) Fansler. He attended Lakeville High School and graduated with the Class of 1961.
As a young man, he began working at Taylorâ€™s Grocery in Lakeville, IN and moved on to work for Krogers in Broadmoor Plaza, South Bend, IN for 39 years, retiring in 2000.
Dale met Jerrolyn M. â€œJeriâ€ Izdepski, who became his wife of 55 years, at the Dog-N-Suds Drive In in Lapaz, IN where she worked as a â€œcar hop.â€ Dale and Jeri married on June 6th, 1964 and moved to their home in the country outside Lapaz. He was an avid fisherman for many years, enjoying summer fishing vacations to Wisconsin that provided priceless memories for his entire family. He was a lifelong fan of Notre Dame and the Chicago Bears, Bulls, Blackhawks, and Cubs. He was also a great supporter of his familyâ€™s activities, Southern Gospel music, and a good slot machine.
Dale is survived by his wife, Jeri, and their children: Jeff (Penni) Fansler of Walkerton, Richard (Connie) Fansler of Bradenton, FL, David (Marie) Fansler of Walkerton and Sheri (Gary) Butler of Bremen: grandchildren: Ashlee (Jared) Egger, Michael (Emily) Fansler, Jared Fansler, Nicholas (Emily) Medich, Jacob Medich, Graysen Fansler, Lauren Fansler, Jordan Keeley, Cameron Butler, Cali Butler and Westen Felix ; great-grandchildren: Durham Egger, Gatlin Egger, Kegan Shiflett, Ljiljana Medich, Jalen Medich and Gabriel Medich. He is also survived by numerous in-laws, nieces, nephews, cousins, and two uncles.
He was preceded in death by his parents; brother, Michael; and in-laws Alfred and Patricia Izdepski.
A Celebration of Life will be held on Monday December 2, 2019 at 12 p.m. at the Johnson-Danielson Funeral Home, 1100 N. Michigan Street, Plymouth. Visitation will be from 10 a.m.- noon in the funeral home.
Burial will follow in the New Oak Hill Cemetery, Plymouth.
In lieu of flowers, memorial contributions can be made to Center for Hospice Care 112 S. Center St. Plymouth, IN 46563.