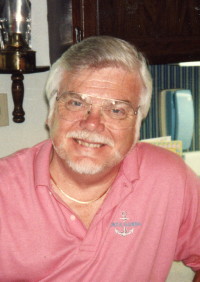 George E.R. Brown, 89, passed away at Courtyard Healthcare in Goshen at 5:45 am on August 11, 2020
Born in Plymouth, Indiana on August 28, 1930, George was the son of Paul Robert (PR) and M. Ellen (Jenkins) Brown. George served in the Jr. ROTC program from 1944-1947. He enlisted in the National Guard in 1947 and honorably went active into the U.S. Navy in 1948. He attended class “A” Aviation Storekeeper school. Upon graduating George was assigned to VF171 Navy Jet Fighter Squadron as an Aviation Storekeeper. He proudly served aboard the USS Coral, USS Midway and the USS Franklin Rowe Delaware during the Korean War and retired in 1952 as an AK3.
He graduated from Arsenal Technical High School with the class of 1948. He came home and worked in the family business at Brown Transfer Co in Plymouth, Indiana. In 1955, he went to work as an automotive parts manager at Oliver Ford Sales in Plymouth, Labas Chevrolet in Plymouth, and finally Tom Naquin Chevrolet in Elkhart where he retired in 1991 after 36 years.
George married Mary Jo Johnson in Plymouth, Indiana in 1955, and they would have a son, William. She would pass in 1975. He would meet the love of his life Judith A. Hartung. The two would wed in 1981 and combine their two families as one. George loved traveling when he could and fishing. He was a loving father to Bill, Joleen, Jon, Jackie and Jim. George had many passions throughout his life including serving and was a member of: 32nd Degree Mason, Past President of Post-Polio Group of Charlotte County, Woodcarving Association of Charlotte County, Past President of the Phi Delta Kappa of Plymouth, National Vice President of the Phi Delta Kappa, Lifetime member of the DAV, member of the VFW Post 1162 in Plymouth and Past Commander, member of the First United Methodist Church and President of the Northern Indiana Parts Managers Association.
He is survived by his loving wife, Judith, and their children: Jackie (Rick) Jozwiak of Middlebury, Jim (Leah) Hartung of Plymouth and Jon (Carolyn) Knepper of Sulphur, LA; grandchildren: Joel Hartung, Aaron Hartung, Captain Matt Jozwiak, 1st Lieutenant Randy Jozwiak, Captain Allen Jozwiak, Jared Knepper and Devan Knepper. He had also been blessed with eight great grandchildren.
George was preceded in death by his parents, his brother Tom, son Bill and daughter Joleen.
Visitation will be held on Saturday August 15, 2020 from 11-1 p.m. at Johnson-Danielson Funeral Home, 1100 N. Michigan Street, Plymouth. Funeral services will follow at 1 p.m. with Pastor Ed Friberg officiating.
Burial will be at New Oak Hill Cemetery with Military Honors provided by members of the American Legion Post 27, Veterans of Foreign War- Marshall County Post 1162 and Disabled American Veteran Chapter 42.
Memorial contributions can be made to the Fellowship Missions Homeless Shelter 1520 Winona Ave Warsaw, IN 46580.
PLEASE NOTE: For your protection, the entire funeral home staff will wear masks. It is mandated that family members and their guests do so as well. The family asks that you please practice social distancing from them during the visitation.