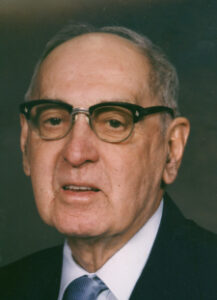 George Henry Snyder, 92, died of natural causes at his residence, 208 Shalley Drive, Plymouth, at 11:20 p.m. on Tuesday, February 14, 2006.
The son of Milo and Emma Louise Cox Snyder, George attended Plymouth Schools. He attended Coyne Electrical School in Chicago.
A veteran of the United States Army in World War II serving from 1941 to 1945, he worked Corporal Dwight D. Eisenhower’s office.
On April 3, 1942, in Tacoma, Washington, George and Edna Piper were married.
He worked in Plymouth at McCord’s before his military duty and he returned there after the war. He retired in 1978, after 39 years with the same employer. While at McCord’s, George served as president of the United Auto Workers for several years.
He opened Snyder’s Repair Shop, sharpening saw and mower blades and working on small engines and lawn mowers.
Blessed with a green thumb, he had a large and beautiful garden.
He was a member of the Marshall County Historical Society, the Genealogy Society and helped to start the Marshall-Starke Society, serving as treasurer and member of the board of directors.
George was a dedicated and faithful member of the Calvary Lutheran Church which he joined in 1939 when it first met at the Plymouth Hotel, which is now the Plymouth Building. He was a trustee and elder within the church during several decades. He is survived by Edna, his loving wife of almost sixty-four years, and their two daughters and a daughter-in-law. They are Judith L. and Carl Jeffcoat, Stuart, Okla.; Elizabeth E. and Donald Duvall, Plymouth, Ind. and Patricia G. Snyder, Wheaton, Ill.
Seven grandchildren survive as well. They are: Judith’s children: Thomas E. Kamp II., and Tamela S. Iles: Elizabeth’s children: Keneth J. Worsham, Steven R. Worsham and Jeffery L. DuVall and Patricia’s children: Derek and Joel Snyder.
Five great-grandchildren and one-great-great grandchild also survive.
George was preceded in death by his parents, a son, Prescott C. Snyder two brothers, Carl and Clyde Snyder, a sister, Mary Snyder, two half-brothers and one half-sister.
Friends will be welcomed by his family to celebrate George’s long and happy life on Friday, February 17, 2006, from 4 to 8 p.m. in the Johnson-Danielson Funeral Home, 1100 N. Michigan St., Plymouth, Ind.
Visitation will also be held for one hour prior to church services on Saturday, February 18, 2006, at 11 a.m. in the Calvary Lutheran Church, 1314 N. Michigan St., Plymouth. Rev. Steven Resner will officiate.
Burial will be in New Oakhill Cemetery, Plymouth.
Memorial gifts will be welcomed by the Center for Hospice and Palliative Care, Marshall County Chapter or the Calvary Lutheran Church.