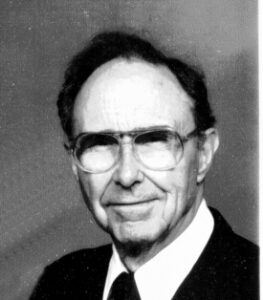 George L. Hill, 88, 1002 Red Maple Drive, a resident of Plymouth for the past 14 years, died of natural causes at 6:10 P.M. in the Pilgrim Manor Nursing Home on Tuesday, August 23, 2011. George was born in Davenport, Okla., on July 23, 1923. He was the son of Herbert Clinton Hill and Cynthia “Alice” Manning.
In 1943, George enlisted in the Army Air Force. He was honorably discharged
with the rank of Sergeant in May of 1946. After World War II, George began working in the Chicago area where he met his wife, Eileen. On April 2, 1949, George and Ruth Eileen Braselton were married. George was a talented carpenter and his love for woodworking shone throughout their home. People appreciated George’s gentle spirit and his twinkling eyes.
He worked in the steel industry as a steel fabricator and welding set-up for 22 years, retiring in 1985. When living in Illinois, George was actively involved in the Harvey and Lansing Churches of the Nazarene. George was the church’s handyman, served on the church board, and taught Sunday School. After moving to Plymouth, George became a member of the Plymouth Wesleyan Church.
George is survived by his wife and their two daughters and two sons. His daughters are Barbara Ann Shidler of Mishawaka and Susan Lynn (Charles) Allen of Plymouth. His sons are Dale Allen (Teddie Lynn) Hill, South Bend and Donald Ray (Victoria) Hill, Valparaiso.
George is survived by 10 grandchildren; James Scott (Kara) Hill, Amy (Tim) VanSwol, Ben (Giacinta) Shidler, Beth (John) Elkani, Brittney Shidler, Nicholas (Anna) Allen, Rachael (Chris) DeMarse, Jeffrey (Alleigh) Allen, Andrew and Sarah Hill.
George is also survived by four great grandchildren Preston and Caden VanSwol, Joel Elkani and Lucas Scott Willis.
A brother, Herbert Ray (Eula Mae) Hill, Elma, Washington, survives as well.
George was preceded in death by his parents and a brother, Floyd Hill.
Friends are invited to visit with the family on Saturday, August 27, 2011 from 5 to 8 P.M. in the Johnson-Danielson Funeral Home, 1100 N. Michigan St., Plymouth.
A funeral service to George will be held at 2 P.M. on Sunday, August 28, 2011, in the Plymouth Wesleyan Church, 11203 S. Michigan St., Plymouth. Ed Friberg, Associate Pastor of the church, will officiate. A Military graveside service will be accorded to George by the Plymouth American Legion, VFW and Disabled American Veterans Burial will be in the New Oakhill Cemetery, Plymouth.
Memorial gifts in George’s memory may be made to the Plymouth Wesleyan Church Building fund.