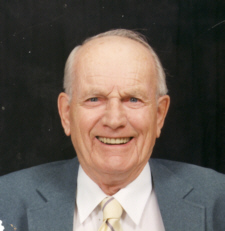 George R. Holl, Sr., 1004 W. Adams St., Plymouth, died at 8:50 am on Saturday December 1, 2007 in his residence with his loving wife by his side.
He was 80-year-old.
He was born in Terre Haute, Ind., on January 6, 1927; George was the son of Russell G. and Margaret Blair Holl.
He graduated from Highland Park High School, Dallas, Texas, with the class of 1943.
A veteran of World War II, he served his country in the United States Navy for three years.
George had lived in Marshall County ever since his marriage to Bessie M. Pigg on January 29, 1950. They lived in Culver for 11 years before moving to Plymouth in 1967.
A farmer all of his adult life, he also worked at the Bendix Corps in South Bend, for 35 years, retiring in 1985.
He was a member of American Legion Post 27 and the Eagles’ Lodge.
George was a charter member of the local AARP and was a member of the United Auto Workers of South Bend.
His hobbies were farming and work. George and his wife had 9 horses, 1 donkey, they raised feeder pigs and were the largest hog farmers in the area.
George is survived by his wife Bessie of nearly 57 years, a son and daughter-in-law, Dr. George Robert H. “Rob” and Sally J. Holl, Jr., Plymouth, and by a daughter, Denise R. Holl, Danbury, Conn.
Two grandsons, Brent R. Holl, Terre Haute, and Ryan A. Holl, Manitowoc, Wis. also survive. Two brothers, Charles “Frank” (Barbara) Holl, Tacoma, Wash., and Fred Holl of Oxford, Ohio, survive as well.
Six nieces and nephews also survive.
George was preceded in death by a brother, John Holl.
Friends are invited by his family to celebrate the life of George Holl, Sr. from 5 to 8 p.m. on Wednesday, December 5, 2007, in the Johnson-Danielson Funeral Home, 1100 N. Michigan St., Plymouth.
Funeral services for George will be held on at 10:00 am Thursday, December 6, 2007, in the funeral home with services conducted by Father John Schramm, pastor of St. Thomas Episcopal Church and Tom Padberg, chaplain of the Marshall County Hospice and Palliative Care.
Burial will be in Roselawn Memorial Park, Terre Haute, Ind.
Memorials in George’s memory may be made to the Marshall County Humane Society or to St. Thomas’ Church and The center for Hospice and Palliative Care.