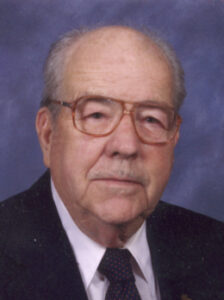 Gerald Dean Wesley Irwin of Pennsylvania Avenue, Plymouth died on Tuesday March 30, 2010 at 1:35 a.m. in St. Joseph Regional Medical Center, Plymouth Campus.
Gerald was born on October 4, 1925 in Plymouth, the son of Francis A. and Mable Garner Irwin. He attended Green Township School and graduated from Argos High School with the class of 1943.
On September 23, 1945 Gerald took Lola Jean King as his wife in the Santa Anna United Methodist Church, they were the first couple to be married in the church. Lola preceded him in death on February 5, 2001.
Gerald worked as a self employed Carpenter and a Contractor from 1955 until his retirement in 1995, throughout his career he designed and built many beautiful homes throughout the Marshall County area. He was a lifelong member of the Santa Anna United Methodist Church in Argos. He and Lola enjoyed serving as lay members to the United Methodist Conference. He was a church pianist for many years; he enjoyed entertaining at nursing homes and had a great time playing while the kids all sang along.
Gerald is survived by five sons, they are Terry & Kathy Irwin, Straughn, IN; Rev. James & Sue Irwin, Plymouth, IN; John Irwin, Inwood, IN; Kevin & MaDonna Irwin, Tippecanoe, IN; Kenny Irwin, Plymouth, two daughters Cindy & Richard Taber, Argos, IN Sandy Stiles, Plymouth, IN; twenty grandchildren, 19 great grandchildren, a sister Nyla & Marvin Snyder of Argos, IN, good friends Betty Heiden and Mary Jane Rabella, several nieces and nephews survive as well.
He was preceded in death by his wife, parents, brothers Melvin and Gene, and a great granddaughter Kendall.
Friends are invited to a time of sharing with Gerald’s family on Friday April 2, 2010 from 4 to 8 pm in the Johnson-Danielson Funeral Home at 1100 N. Michigan Street, Plymouth, IN 46563.
Funeral services will be held on Saturday April 3, 2010 at 11 am in the funeral home. Rev Henry Sprunger of the Santa Anna United Methodist Church will officiate.
Burial will follow in the Maxinkuckee I.O.O.F Cemetery,at Poplar Grove, Argos.
Memorial contributions in Gerald’s name may be given to the Santa Anna United Methodist Church.