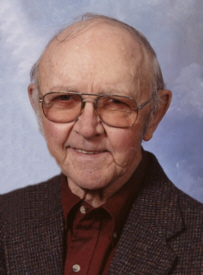 Gerald E. “Jerry” Marsh, a Culver resident for the past six years, coming from Centerville, Indiana, passed away at Pilgrim Manor Nursing Center, Plymouth, at 10:00 p.m. on Thursday, January 16, 2014 of natural causes.
Jerry is a native of Missouri, particularly the Yancy Mills area. He was born the son of George E. and Dora May (Baker) Marsh in Phelps County, Missouri on October 25, 1924. He attended Missouri School of Mines in Rolla, Missouri and had taken some college courses.
He had served as a Sergeant in the U.S. Army-Air Force during W.W. II.
On December 16, 1950 in the Philadelphia Baptist Church in Phelps County, he married Wanda L. Gabel. They had 61 wonderful years together before Wanda passed away on September 24, 2012.
Jerry had been a Maintenance Supervisor at Chrysler Corp. in New Castle, Indiana until his retirement in 1980.
He enjoyed tinkering with engines, woodworking, fishing, hunting during the deer season, traveling, playing dominos, putting puzzles together and listening to Southern Gospel Music. He was a member of the Southern Baptist Faith and most recently attended the Plymouth Baptist Church with his family. Jerry is survived by two children (and their families), son: Terry L. and his wife Carol Marsh and their children, Jaclyn (Kevin) Waddell and Sarah Marsh all of Cumming, Georgia: daughter: Melodie M. and her husband Kevin Overmyer and their daughter, Suzanne (Dan) Barth all of Culver, Indiana. Three great-grandchildren include: Ansley, Hannah and Grace.
A sister: Anna Mary Heavin of Licking, Missouri, a niece, Linda (Larry) Miller and a nephew Gerald (Dee) Heavin also survive.
He was preceded in death by his parents and his spouse, Wanda.
The family invites you to a luncheon at the Church of Christ in Licking from 11:00 a.m. to 1:00 p.m. prior to visitation on Wednesday, January 22, 2014 from 1:00 to 2:00 p.m. in the Fox Funeral Home, 128 S. Main St., Licking, Missouri. Services will immediately follow at 2:00 p.m. in the funeral home with Pastor Mike Gorman officiating.
Burial will be in the Ozark Hills Memorial Gardens in Rolla, Missouri.
Preferred are memorial Gifts to The American Heart Association, 208 S. LaSalle, Suite 900, Chicago, Illinois 60604 or the Philadelphia Baptist Church, 22225 County Rd. 7490, Rolla, MO 65401.