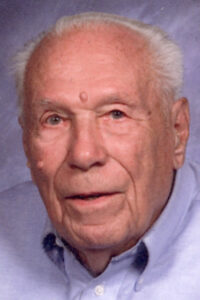 Gerald James Thomas, 100, passed away at 1:06 a.m. in Pilgrim Manor on Friday morning, February 3, 2012.
Born in Plymouth on April 17, 1911, Gerald was the son of William Arthur and Viola Belle Berger Thomas.
A lifetime resident of Marshall County, Gerald graduated from Bourbon High School with the class of 1931. In 1940, he joined the Army Air Force and served his country through WWII. He was honorably discharged in 1945.
Gerald worked through the years at Indiana Tool, the Basket Company, the Box Factory and for Studebaker for 11 years. Employed by Donnelley for 8 years as a paper shredder, he retired in 1976.
He was a member of the Plymouth Wesleyan Church.
Gerald is survived by two sons. They are Ronald Stephen Thomas, Ottawa, OH: and James Paul (Margaret) Thomas, Plymouth, IN.
Three grandchildren survive as well: Rhonda (Chris) Frank, North Webster, IN.:Michael Linn (Tiffany) Thomas, South Bend, IN: and Aaron Thomas, Indianapolis, IN., 2 great-granddaughters Gwendolyn Renee Frank and Lilliana Marie Frank both of North Webster, IN., survive as well.
One brother and a sister also survive. They are Donald (Edith) Thomas, Snohomish, WA. and Dorothy Olive Thomas, Plymouth, IN. along with a sister-in-law Martha Thomas, Warsaw, IN.
Gerald was preceded in death by his parents and by three wives: Pauline E. Suter Thomas, Althea R. Ward Thomas and Thelma DudleyThomas. Two sisters, Irene Elizabeth Thomas and Mabel C. Heflick and 2 brothers, Howard B. Thomas and Frank Thomas. A time of sharing with Gerald’s family will be held on Tuesday February 7, 2012 from 3 to 7 p.m. in the Johnson-Danielson Funeral Home 1100 N. Michigan Street, Plymouth Indiana 46563. Continued sharing will take place one hour prior to services on Wednesday February 8, 2012 at 11am in the Plymouth Wesleyan Church 11203 S. Michigan Street Plymouth, Indiana 46563.
Burial will follow with military honors provided by members of the Plymouth American Legion Post 27, Veterans of Foreign Wars – Marshall County Post 1162 and the D.A.V at the Oakhill Cemetery, Plymouth.
Memorial contributions in Gerald’s name may be made to the Plymouth Wesleyan Church.