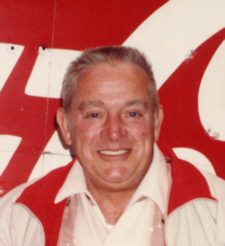 Gerald “Jerry” L. Popham, 77, Argos, In. died at his residence at 4:45 p.m. on Thursday, May 6, 2010. He had moved to Marshall County after his retirement.
Born in Chicago, Ill., on December 18, 1932, Jerry was the son of Marion Francis and Martha Ruth Oliver. He graduated from the South Shore High School with the class of 1952.
On Aug. 2, 1952, in St. Felicitas Church in Chicago, Jerry and Nancy Werntz were married. Jerry worked for Kroger and then moved on to owning and operating his own Milk Route before joining Coca Cola. He retired from Coca-Cola after 40 years of service.
Jerry enjoyed woodworking, golf and gardening. He was a member of St. Michael’s Roman Catholic Church.
Jerry is survived by his wife, Nancy and by their five children: a son and four daughters. They are: Gerald Raymond (Jan) Popham, Florida: Barbara Ann (Tim) F. Berg, Plymouth: Mary T. (Sean) Donohoe (Demotte, IN.): Sandra (David) Zad (North Carolina: and Laverne (Peter) Visvardis( Ill.)
Ten grandchildren survive as well. They are Amanda Popham;Timothy Michael Berg and Jennifer Mackey: Maureen Donohoe, Collen Robertson and Daniel Donohoe: Kimberly Ann Zad and Joseph David Zad and Angela Visvardis and Catherine Visvardis.
Ten great-grandchildren also survive.
Friends are invited to celebrate Jerry’s life with his family on Monday, May 10, 2010m from 4 to 8 p.m. at the Johnson-Danielson Funeral Home, 1100 N. Michigan St., Plymouth. Funeral services for Jerry will be held on Tuesday, May 11, at 11 a.m. in St. Michael Catholic Church, 613 N. Center St., Plymouth. The Rev. Father William Kummer will officiate.
Interment will be in St. Michael’s Cemetery.
Memorial gifts may be made to St. Michaels or to The Center for Hospice and Palliative Care, Inc.