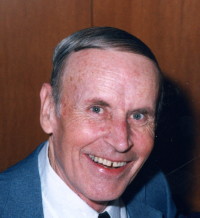 Gerald “Jerry” Ray Walker 77, passed away peacefully at home on Wednesday, June 17, 2020.
Jerry was born in Sidney, Nebraska, on February 13, 1943, to Raymond and Geraldine (Brundige) Walker. He graduated from the University of Nebraska with a bachelor’s degree in mechanized agriculture.
He worked for Caterpillar in Peoria, Illinois, was the manager for Apple’s Christmas Tree and Blueberry Farm in Culver. Jerry was also a Matco Tool distributor.
Whether restoring his classic Austin Mini Cooper, skillfully folding origami, creating stained glass designs, or tinkering on any assortment of projects, Jerry enjoyed working with his hands and the challenge of puzzling out a solution. Jerry also served in the U.S. Air Force National Guard. He was a member of the Indiana Christmas Tree Growers Association (including serving a term as president), the Hoosier Old Wheels Car Club, and Pretty Lake Trinity United Methodist Church, where he enjoyed singing in the choir.
Jerry is survived by his wife of 52 years Elaine; son Michael (Shelly) Walker of Lake Oswego, Oregon, and their children John, Faith, Cadence and Alex; daughter Krista (Scott) Nicely of Peoria, Illinois, and their children Elyse, Liam and Giselle; two brothers, Rick (Rhonda) Walker of Sidney, Nebraska, and Bryan (Julie) of Minco, Oklahoma; and sister Barbara (Jim) Watson of Dawnsonville, Georgia.
He was preceded in death by his parents, and sister Marni Anders.
Graveside services for Jerry will be held on Thursday June 25, 2020 at 11:00 A.M. at the New Oak Hill Cemetery ,Plymouth with Pastor Tami Boggs officiating . Memorial Contributions can be made to Pretty Lake Trinity United Methodist Church, P.O. Box 266 Plymouth, IN 46563, or The Muscular Dystrophy Association at mda.org.