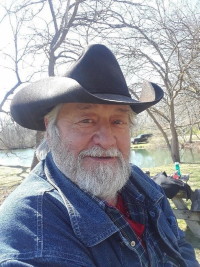 Gerald “Ray” Cummins, 76, also known to many as “Cowboy”, peacefully passed away on Saturday morning June 20, 2020. While his family misses him dearly, he has been reunited with the love of his life and best friend, Nicole.
He was born on February 22, 1944 in Plymouth, Indiana to Bernard and Sylvia (Branham) Cummins. He graduated from Plymouth High School with the class of 1962.
Ray fell in love with a girl in grade school, Miss Nicole Sue Rankin, and would continue the chase until she decided to give him a try in high school. Little did she know, he was her match made in heaven, and the two would wed on January 4, 1964.
A brick mason, Ray was a hardworking man, but very skilled at his trade. He enjoyed carving wooden spoons and knives, and making wooden toys for children.
He loved his family and shared many special trips and memories with them. He adored his grandchildren and making them laugh.
Ray is survived by his daughter, Patricia L. Cummins of South Bend and her children, Jonathon (Karole) Ramirez and Tiffany Ramirez; son, Michael D. (Tammia) Cummins of Mishawaka and his children: Amber, Natasha and Katrina Cummins, Nick and Alicia Singleton and Josh Kolodziez; great-grandchildren: Izaiah, Genavieve, Ellyona, Chloe, Claire, Cody, Randy, Remington, Linkin, Gabi, Jesse, Aliana, Mariah, McKenna, Madalyn, Nova and one due in December; siblings: Joyce Winters, Wanda Heleine and Steve Cummins; brother-in-law, Glenn Anders and sister-in-law, Karen Roush; as well as, numerous nieces, nephews and extended family members.
He was preceded in death by his wife, Nicole in 1999; his parents; and his siblings: Jim, Jack, Jeannie Graham and Linda Anders.
A Celebration of Life will be held on Tuesday, June 30, 2020 at 1 p.m. at the Johnson-Danielson Funeral Home, 1100 N. Michigan Street, Plymouth. Friends are welcome to visit with the family one hour prior in the funeral home.