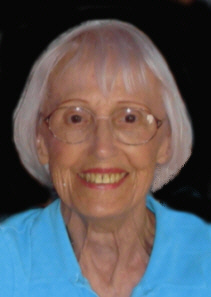 Geraldine M. “Gerry” Hoeffler, 83, 16492 Pretty View Drive, Plymouth, passed away Wednesday afternoon in the Our Lady of Peace Hospital, Mishawaka. Her death came unexpected to her family who has long witnessed her battle of multiple illnesses with courage and dignity while never uttering a word of complaint.
Gerry was born on August 5, 1927 in Royal Oak, Michigan, the daughter of Frank W. and Marie L. (Herson) Ferguson. The family moved to Lapeer, Michigan where she graduated from high school in 1944. She grew up a Detroit Tiger fan and first baseman Hank Greenberg was her favorite player.
With a nurturing heart, Gerry enrolled at Wayne State University and entered the Army Nurse’s Training Program attaining her practical experience at Grace Hospital. Following graduation her first assignment was at the V.A. Hospital in Long Beach, California. While there she attended Michigan’s win in the Rose Bowl and when the goal post was coming down she took a splinter as a souvenir.
A niece’s illness with Cystic Fibrosis brought Gerry back home to Michigan. Upon that return she met her husband to be Calvin A. Hoeffler. They chose the perfect little church in Dearborn and were wed on October 2, 1954. Together they experienced 56 joyful years.
They began a family and raised two sons, all while Gerry maintained her nursing career. Gerry performed volunteer work with her church guild and community and developed strong friendships that remain even today. In 2006 the couple moved to Plymouth to be ever closer to family.
Her beloved family includes her loving husband; Calvin, two sons and their attentive spouses; Mark K. and Anne Hoeffler of Santa Fe, New Mexico and Douglas A. and Marie Hoeffler of Plymouth and the three grandchildren she doted over; Jessica, Calvin and Kelly. Retirement allowed her to attend their every activity.
Also surviving is a sister; Nancy Brown of St. Johns, Michigan and a brother; Gordon and his wife Elon Ferguson of Belleville, Michigan.
She was preceded in death by her parents and a sister; Patricia Pearson.
In keeping with Gerry’s wishes, there will be no services or visitation planned.
Memorial gifts in memory of Gerry may be given to St. Michael School Improvement Fund, 612 N. Walnut St., Plymouth, Indiana 46563