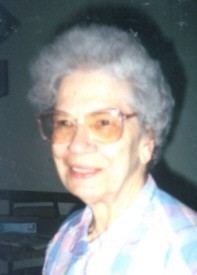 Gertrude Marie “Trudy” Joseph, 92, passed away at home on Wednesday, October 21, 2009 at 10:27 a.m. of natural causes. Formerly of Windmill Park, she has made her home at 12747 Peach Road with her granddaughter Kim and James Lockwood of Plymouth.
She was born in LaCrosse, Indiana, the daughter of James and Nola (Woods) Armentrout on January 31, 1917. Trudy has lived in the Marshall County area most of her lifetime.
Trudy retired in 1979 from Chamberlin’s in Arkon, Indiana as an inspector. But her best job as she put it was; “Bossing the rest of them around”.
She married Ross Smith in June of 1932 he preceded her in death Thanksgiving Day of 1981. On February 29, 1983 in Logansport, she married David E. Joseph. Her heart was broken when David preceded her in death just six weeks ago on September 8, 2009.
They had attended the Plymouth Baptist Church.
Trudy is survived by two sons; Richard (Joyce) Smith of Holiday Island, Arkansas and David (Linda) Smith of Loogootee, Indiana. Also surviving are three step-daughters and one step-son they are; Christina Morlock of Plymouth, Rebecca (Jim) Fiely and Marsha (Joe) Gibbs all of Logansport and Phillip (Brenda) Joseph of Idaho and daughter-in-law; Dorothy Smith.
Twenty-five grandchildren, twenty-eight great-grandchildren and nine great-great grandchildren survive as well.
A sister Opal Widener of Rochester and a brother Kenneth Armentrout of The Colony, Texas also survives.
She was preceded in death her spouse, a son; Robert Smith and son-in-law; John Morlock, one brother and three sisters.
The family will receive friends from 4 – 7 p.m. Friday October 23, 2009 in the Johnson-Danielson Funeral Home, 1100 N. Michigan Street, Plymouth where services will be held at 11:00 a.m. Saturday with Rev. Glen Mitchell officiating.
Burial will follow services in the Reichter Cemetery, near Talma, Indiana. Memorial gifts may be given to the Center for Hospice & Palliative Care, 112 S. Center St., Plymouth, Indiana 46563