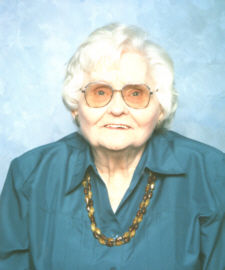 Gertrude Wilson Connolly, 96, died at 9:35 p.m. on Sunday, March 2, 2008 in Miller’s Merry Manor, where she had been a resident for over 14 years. Before coming to Plymouth, Gertrude had been a resident of Elkhart for many years.
Born on March 25, 1911, in Providence, Rhode Island, she was the daughter of Frank R. and Ruth May Russell Wilson. Gertrude was a graduate of Lowell High School, Lowell, Massachusetts.
Gertrude was a direct descendent of John and Elizabeth Baker Russell. They were a pioneer family who settled in Woburn, Massachusetts, circa 1643.
On July 31, 1931, Gertrude and Carlton H. Connolly were married in Nashua, New Hampshire. Carlton died on July 6, 1993.
A devoted homemaker and mother, Gertrude had worked as a sales clerk at Ziesel’s Clothing Store in Elkhart. Gertrude had many interests including: her family, reading, sewing, researching genealogy, and her favorite past-time was writing poems. She was also active in the Republican party in Elkhart, and had been very active in the Civil Defense during W.W. II.
She was a member of the First Congregational Church in Elkhart, where she had been very active in the activities of the church.
Gertrude is survived by two daughters, Ruth E. (Ronald) Weist of Plymouth, Janet Lawrence of Centralia, Washington; seven grandchildren, eight great-grandchildren and one great-great-grandchild.
She was preceded in death by her parents, her husband, a daughter, May E. Bond, a son-in-law, Carl R. Lawrence, and granddaughter, Karen Lynn Lawrence, a sister, Dorothy Schmelzer and a brother, Homer Wilson.
Friends are invited to share memories of Gertrude with her family from 4 to 6 p.m. on Thursday, March 6, 2008, at the Johnson-Danielson Funeral Home, 1100 N. Michigan St., Plymouth,
Funeral services will be held following visitation at 6:00 p.m. on Thursday, in the funeral home. Pastor Larry Ferguson will officiate.
Burial will be in Prairie Street Cemetery, Elkhart, Indiana.
Memorial gifts in Gertrude’s name may be given to the Salvation Army.