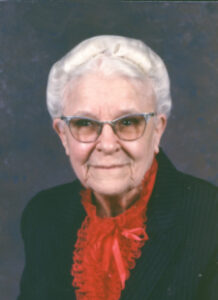 Gladys Shenefield Mangun, died of natural causes in Miller’s Merry Manor, Plymouth, at 10:10 a.m. on Monday, March 24, 2008.
She was 104 years-old.
A devout Christian woman all of her life, she said that the “the Lord will take me when He was ready.” She lovingly would tell her God that she has been here long enough.
“I want to go home,” she would say. “I want to be with Walter.”
And now she is.
Gladys was born on a farm north of Bourbon on June 7, 1903. She was the third child of Charles and Minnie Hatfield Shenefield.
She attended the old country school, Wauson elementary, a one-room schoolhouse in German Township. At home she milked cows and worked in the fields, cutting and shucking corn. By the time she was 13, she was walking behind two horses to “drill” the wheat. She and her sisters tended 400 chickens, gathering a crate of eggs every day before leaving for school.
Gladys went to school until the eighth grade. For a time, until it interfered with her health, she worked at the Mishawaka Ball Band plant.
She was a charter member of the Bourbon United Pentecostal Church, founded in 1925, and kept a treasured photograph in her room at Miller’s of her father and brother working with a crew of men on the foundation of the church.
She and her sister, Beatrice, often sang and played the piano and guitar for weddings and revivals.
She said that all she ever knew was working on the farm and church work.
Until she met the Rev. W.D. Mangun, a handsome widower.
The couple were married on October 15, 1950. She was 47 years old and often said that “he was worth waiting for.”
Gladys and her husband became founding members of the Old Time Religion Tabernacle, now the House of Prayer on the Plymouth-Goshen Trail in Plymouth. Walter died in 1982.
Proud of being “a prayer warrior,” Gladys loved music, farming and crafts. She always had a lap full of crocheting and made beautiful afghans for her nieces. Gladys is survived by four step-children: Martha Spencer, Plainwell, Michigan: Dr. Ruth Holland, Columbus, Indiana: Gladys Starkweather, Marblemount, Washington and the Rev. G.A. Mangun of Alexandria, Louisiana. A niece, Mary Wharton of Argos and a nephew, Gary Shenefield of South Bend, Indiana, also survive, together with numerous grandchildren, great-grandchildren, great-great grandchildren, two great-nieces, a great-great-niece and a great-great-nephew. Gladys was preceded in death by two sisters, Beatrice Shenefield and Hazel Shenefield and two brothers, Ivo Shenefield and Grant Shenefield. Friends are invited to celebrate the life of Gladys Shenefield Mangun from 5 to 7 p.m. on Thursday, March 27, 2008, at the Johnson-Danielson Funeral Home, 1100 N. Michigan St., Plymouth.
Funeral services for Gladys will be held at 10 a.m. on Friday, March 28, 2008, at the funeral home. The Rev. Ronald D. Humphrey, pastor of the House of Prayer, will officiate.
Burial will be in New Oakhill Cemetery.
Memorial gifts in Gladys’s name may be made to a Charity of the Donor’s choice.