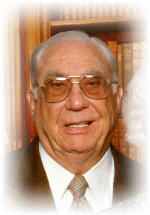 Following a six year battle with Alzheimer’s and cancer, Glen A. Quivey, 1800 Hillcrest Ave., died in Pilgrim Manor Nursing Home at 8:35 p.m. on Monday, December 23, 2002. He was 81 years old. Born in Plymouth on August 6, 1921 , Glen was the son of Clarence and Nellie Irwin Quivey. He graduated from Culver High School with the class of 1939. He attended Manchester College for a year before enlisting in the U.S. Medical Corps in August of 1941, as an x-ray technician. He was stationed at Pearl Harbor when it was bombed on December 7, 1941. After serving for two years at Pearl Harbor and six months on Christmas Island , he returned to the states and was reassigned to Europe , ending his tour of duty in Berlin . Glen returned to the United States in November, 1945. On August 10, 1946 , Glen and Barbara R. Mahler were married in her parents, Leslie and Bernice Marsh Mahler’s home in Culver. After his return from service, Glenn earned a Master’s Degree in Agriculture from Purdue University . He taught Vocational Agriculture for two years at Lagro High School . He was a farm loan agent for the John Hancock Insurance Co. for ten years and was with the U.S. Army Corps of Engineers, retiring after 29 years as Chief Appraiser of the Louisville District. A workaholic, he enjoyed what he did. He was an avid fisherman and loved to fish in Canada . He enjoyed collecting guns and knives and working with photography. Glen was past president of the Indiana Society of Farm Management and Rural Appraisers and was a life member of VFW Post 7262, Greenville, Ohio, and the Masonic Lodge 143 also of Greenville . He belonged to the Murat and Scottish Rite, Indianapolis , was a Kentucky Colonel and was a member of the Plymouth Lions Club. Glen is survived by Barbara, his wife of 56 years and by their daughter Lois (Dwight) Crowther, Hingham , Mass. A granddaughter, Barbara M. Crowther, Washington , D.C. and two brothers, Virgil ( Frances ) and Hugh (Eileen) Quivey, all of Plymouth , survive his death as well. Glen was preceded in death by his parents, two brothers, Albert and Ronald and two sisters, Mary Alice Lannon and Rose Quivey. Friends may share memories of Glen with the family in the Johnson-Danielson Funeral Home, 1100 N. Michigan St. , Plymouth , on Sunday, December 29, 2002 , from 4 to 6 p.m. Funeral services for Glen, officiated by the Rev. Dr. Dean Fager, pastor of the First United Methodist Church of which Glen was a member, will be held in the funeral home at 10:30 a.m. on Monday, December 30, 2002. Burial will be in the Maxinkuckee I.O.O.F. Cemetery , Culver. Memorial gifts in Glen’s memory may be given to the First United Methodist Church , Plymouth .