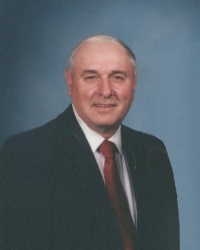 Glen E. Roberts beloved husband of Martha June (Overmyer) Roberts on Tuesday, April 9, 2019 entered Heaven peacefully with his wife of 67 years beside him.
Born in Marshall County Indiana on August 18, 1932, Glen was the son of George M. Roberts and Mary (Eby) Roberts. Glen purchased his first tractor in high school a John Deere M. The tractor came with a 2-bottom plow and cultivator. Glen was on his way to become a successful farmer. On May 27, 1951 Glen married the woman he adored and loved, Martha (Overmyer) Roberts. Glen and Martha lived in Rochester, Indiana after getting married and welcomed their first daughter, Linda (Jerry) Manges. The family continued to grow to a total of 7 children; Dianna (Robert) Swenson, Pamela (Chris) McCord, Judy (Mike) Shivers, Robin (Kathy) Roberts, Roger (Carra) Roberts, and Mary Cristine Nutley Roberts. Glen and Martha brought up their children in the church so each one would have the opportunity to know Christ as their Savior. Every prayer Glen led at family gatherings; he would ask God for all the extended family to accept Christ as their Savior. Glen loved the Bible and would discuss passages with anyone who wanted to carry on a scriptural conversation with him.
Glen and Martha moved to a farm house in Argos in 1955. In 1966, Glen built a ranch home for the family with the help of his brother-in-law Rich Overmyer, and father-in-law Ed Overmyer. Glen dug his first pond on the Argos farm and fished in his free time. Eventually Glen and Martha relocated to a home in Plymouth after purchasing a farm there. Glen worked hard, knew how to fix everything and had an instinct for how to figure out difficult situations. Glen built their final home on Lake Maxinkuckee for his family. His other love after farming was fishing. He could tell you how to catch every fresh water fish and knew all the good fishing places. Glen loved sports and baseball was his favorite, naming his first son after a baseball pitcher. He also enjoyed woodworking, having made furniture and paneled kitchen cabinets for his home in Florida. Glen was a master at operating all heavy equipment from tractors to cranes and bulldozers.
Glen and Martha were very insistent all their children would graduate from college. Something both of them had wanted for themselves. Linda, Dianna, Judy, Robin, and Roger all graduated from Purdue University. Cris graduated from Valparaiso University and Pam graduated from Indiana University. Glen was a huge Purdue Boilermaker fan right up to the very end, not missing a football or basketball game on television.
Leaving to mourn his memory are his wife Martha of Culver; his seven children and their spouses. Glenâ€™s legacy includes 23 grandchildren and 27 great grandchildren. Glen was preceded in his heavenly home by his parents, George and Mary Roberts, brother Kenneth (Velma) Roberts, sister Betty (Rich) Overmyer, brother-in-law Rich (Betty) Overmyer and one premature daughter Glenda Roberts. Family and friends will gather on Friday, April 19, 2019 from 4 – 7 p.m. in the Johnson-Danielson Funeral Home, 1100 North Michigan Street, Plymouth, Indiana. A service to celebrate Glenâ€™s life will be Saturday, April 20, 2019 at the Plymouth Missionary Church, 1350 East Jefferson Street, Plymouth, Indiana at 11:00 a.m. with Pastor Pat Puglisi officiating with a eulogy given by Pastor Robert Beyler. Burial will be in New Oak Hill Cemetery in Plymouth, Indiana following the church service. The family wishes to extend our sincere thanks to all of you who join us in remembrance of Glen as a husband, father, grandfather and great grandfather.