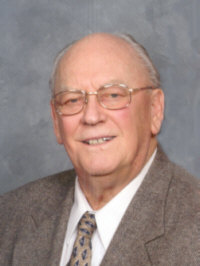 Glendon “Glen” J. Meredith, 82, died, after an extended illness, at 12:30 a.m. on Tuesday, October 19, 2004. Glen died in his home, 805 Baker St., #48, in the loving care of his family and Marshall County Hospice.
Born in Argos, Ind., in the old Kelly Hospital on October 4, 1922, Glen was the son of Eugene J. and Louberta L. Gunkle Meredith. He lived in Argos most of his life, graduating from Argos High School in 1942. He joined the army shortly after his graduation and served as a sergeant with the 351st Army Engineers. His unit saw action in England and France and fought in the Battle of the Bulge, receiving ribbons for three campaigns. He returned to the States in 1945.
Glen retired after 31 years as an electrician in the Plymouth sub-station maintenance department of Northern Indiana Public Service Co. (NIPSCO).
Glen and Carole S. McKean Chamberlin were married on December 14, 1973. Carole was a widow with seven children and Glen a bachelor, when he chose to help raise her young family. Always the gentleman, Glen was a very kind and caring husband and father for all 31 years.
Glen said in a 2001 interview, “all of the children are like my own.”
And, he in turn, truly became a father to them.
A handy man, Glen enjoyed “piddling” with wood working, making various items for all of his family. An avid golfer, he enjoyed playing the game for over 40 years with his friend Dave Scheetz and later, a threesome with Lynn Van Der Weele.
A nature lover, Glen and Carole enjoyed drives in the country. A member of St. Michael’s Catholic Church since 1974, he was a strong believer in the power of prayer. Desperately ill four years ago with chronic lymphocytic leukemia and cancerous bladder tumors, his life was extended, he said, “by prayers from the St. Michael’s family and many other churches.”
Glen had served in the Color Guard of the Argos American Legion, a past officer in the Argos Lions Club and the Argos High School Alumni. He was a 32nd Degree Mason, and later became an active 3rd Degree member of the Knights of Columbus.
He was also a member of a group called “The Grumpies,” who met monthly as part of a wide network of special friends, sometimes golfing together as well as reminiscing.
Glen is survived by Carole, his loving wife and his dearly beloved step-children. They are: Christine and Chuck Lee; Becky and Alan Collins; both of Plymouth; Jim Chamberlin of Mt. Pleasant, S.C., David and Susie Chamberlin; Tom and LeaAnn Chamberlin; John and Julie Chamberlin and Matt and Mitch Chamberlin, all of Plymouth.
Sixteen grandchildren and eight great-grandchildren also survive.
Surviving as well are two sisters, Lucille “Lou” Warnacut, Plymouth and Jane Miller, Austin, Texas, along with several nieces and nephews.
Glen was preceded in death by his parents, his step-mother, Hazel Meredith, two sisters, Elnora Ferris and Guinivere Puppe and two brothers, Richard and Gordon Meredith. Two nephews, Jack Ferris and Tony Meredith and a great-nephew, Randy Helsel have also died.
Friends will be welcome to celebrate the life of Glen Meredith with his family at the Johnson-Danielson Funeral Home, 1100 N. Michigan St., Plymouth, on Thursday, October 21, 2004, from 2 to 8 p.m. A Rosary will be said at 4 p.m. in the funeral home.
A Mass of Christian Burial will be held at 11 a.m. on Friday, October 22, 2004, in St. Michael’s Roman Catholic Church, 611 N. Center St., Plymouth. Father David Voors, personal friend and former pastor of St. Michael’s, now serving at Our Lady of Good Hope, Fort Wayne, Ind., will officiate.
Military graveside rites in New Oakhill Cemetery will be provided by the American Legion Post 68, Argos.
Memorial gifts in Glen’s memory may be made to the Marshall County Hospice or to St. Michael’s Church.