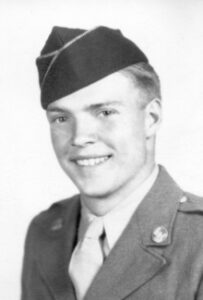 Glenn Delos Amor, 87, of 625 Oakhill Ave, Plymouth, passed away at 5:15 p.m. on Wednesday, May 15, 2013, in Miller’s Merry Manor, Plymouth.
Glenn, a lifetime Marshall County resident, was born in Tyner, IN. on the twelfth of June, 1925. He was the son of Lester A. and Rosa G. (Miller) Amor.
A veteran of World War II, Glenn served in the United States Army and was a member of the American Legion Post 27 in Plymouth.
He worked for the DelMonte Corporation in Plymouth for ten years and served as the Regional Manager for Grower’s Service Chemical Warehouse for sixteen years.
Sixty-seven years ago on August 25, 1946, in the Immanuel Lutheran Church, Donaldson, Claire Adeline Samuelson became Glenn’s bride. They have remained members from that day forward.
Together, they raised a daughter and two sons. With their families they are: Gregory John (Nancy) Amor, Huntington, IN and children; Jonathan, Natalie, and Michelle, Gwendolyn Louise “Gwen” Crum, Plymouth, IN. and children Angela and Kristen, Gene Arnold (Doreen) Amor, South Bend, IN and children Matthew, Geoffrey and Rachael. Great grandchildren include: Victoria, Madelynn, Kole, Tyler, Samantha, Colton and Kamdon.
Glenn is also survived by a sister and a brother: Wilma (Donald) Jones, Valparaiso, IN., and Ivan (Maxine) Amor, Lakeville, IN.
Glenn was preceded in death by his parents and two brothers: Harold and Forrest Amor as well as a son-in-law; Richard Crum.
Visitation will be held on Friday, May 17, 2013 from 5 – 8 p.m. in the Johnson-Danielson Funeral Home, 1100 N. Michigan St., Plymouth.
Funeral services will be held at 10:30 a.m. on Saturday, May 18th in the Immanuel Lutheran Church, North Union Road, Donaldson where calling will resume one hour prior to services in the church. The Rev. Dennis Wenzel, pastor of the church will officiate.
Internment with full military honors provided by members of the Plymouth American Legion Post 27, Veterans of Foreign Wars – Marshall County Post 1162 and the D.A.V. will follow in the Immanuel Lutheran Cemetery.
Memorial contributions may be made in Glenn’s memory to the Center for Hospice Care, 112 S. Center Street, Plymouth, IN 46563.