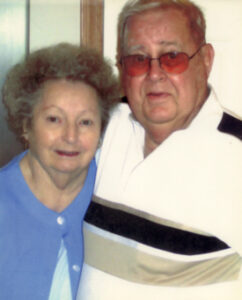 Glenn J. Wade, 83, a Plymouth resident most of his life, died at 7:50 a.m. on Monday, November 21, 2011 in Pilgrim Manor Nursing Center, Plymouth.
Born in South Bend on February 22, 1928, Glenn was the son of Glenn H. and Edna Marie Manuwal Wade.
Glenn had attended Riley High School in South Bend, and served in the U.S. Army during W.W. II.
On October 24, 1948, Glenn and Elizabeth V. Komanich were married in Plymouth. Elizabeth preceded him in death on March 21, 2009. A self-employed truck driver for over 40 years, he was a member of Teamsters Local 364 of South Bend and the Plymouth Moose Lodge.
He enjoyed being with his children and grandchildren and also enjoyed fishing and all types of car racing. Glenn is survived by a daughter: Jeanne (Dan) Beam of Warsaw, and their daughters, Nicole Lancaster and Andrea Gale; two sons: Allen (Becky) Wade of Plymouth, and their children, Michael Wade and Audra Sullivan; Philip Wade of Plymouth, and his daughters, Julie Wade and Jennelle Wade; eight great grandchildren and a sister, Nadene Vincent of Pompano Beach, Florida.
He was preceded in death by his parents and his wife.
The family will hold private joint graveside services for Glenn and Elizabeth at a later date.
Memorial contributions may be made to the American Diabetes Association 30 N. Michigan Ave., Suite 2015, Chicago, IL 60602