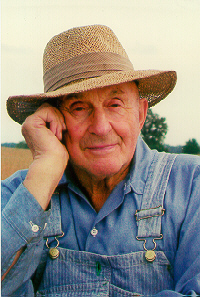 Area farmer and longtime public servant, Glenn L. Overmyer, 92 of 15034 State Road 17, Culver died Wednesday, June 2, 2004 at 6:20 p.m., in the St. Joseph Regional Medical Center, Plymouth. His death was due to complications from a fall on Saturday, May 29th at his home.
Glenn was born June 23, 1911 in Burr Oak to Lewis and Grace Overmyer. He was born on the Overmyer family farm. He was one of 11 children that Lew and Grace had, but Jacob, Irene and Ruth died early in their childhood, and the first Glenn died at birth. The seven remaining were Roy, Ford, Glenn, Helen, Mildred, Mae, and Robert. He and his six siblings attended Burr Oak Grade School right across the street from their home. He graduated from Culver High School in 1931, where he played first base on the baseball team. After graduation he continued to work on the family farm.
At the age of 31 he met the love of his life, Lucile Perkins from Raub, IN, when as a nursing student at South Bend Memorial Hospital, she came to visit the farm with Glenn’s sister, Mildred, a classmate. They married on March 28, 1942 and had five children: Michael, Gary (who died at birth), Patricia, Nancy and Kevin. The first few years of married life, they lived in Burr Oak, and then they brought a 40-acre farm on Redwood Road, and lived there until Glenn’s parents died, after which they moved into the Overmyer Homestead.
A farmer all of his life, he worked hard raising cattle for market, dairying, and farming several hundred acres to the present 500-plus acres he farmed the past few years. He planted mostly corn, soybeans, wheat, and once in a while a few acres of alfalfa. Just this past month Kevin helped him get on his tractor and he planted soybeans for half a day. Although he was tired, he smiled and said he had a great day. Watching the crops and cattle grow was a joy in and of itself for Glenn.
Over the years, he has given the service to his fellow citizens of Union Township, and Marshall County. Glenn was on the State Exchange Bank Board of Directors from 1954 to 1982, taking over the seat vacated by his father’s death. He served on the Marshall County 4-H Beef Committee for several years, which required purchasing steers for the 4-H Beef Members. He served as Union Township Trustee for six years, and then served as a member of the Culver Community High School Holding Board. For six years he was on the board of the Holy Cross Parkview Hospital, and as a County Commissioner, was instrumental in transferring ownership of the hospital from the county to private management.
During his five terms as Marshall County Commissioner from 1972 to 1992 he was involved in building a new county highway garage, the Marshall County Building, the annex to the Marshall County Courthouse, and the extension of Oakhill Avenue across a swamp to the St. Joseph Regional Medical Center. Later a portion of the Road from State Road 17 was named Glenn Overmyer Drive. After years of service for his fellow citizens of Marshall County he was nominated for the prestigious Sagamore of the Wabash, an honor only given by the Governor of the State of Indiana. He received that honor from the Governor Frank O’Bannon. Earlier that year, he was named Culver Lions Club “Citizen of the Year.” Glenn is a member of the Culver Wesley United Methodist Church, and has served on the Administration Board, and Board of Trustees.
He is survived by his wife, Lucile of 62 years: his son, Michael and wife Connie, and grandchildren, Sean, J.B. and wife Jean E., Heather, and Garth and wife Lisa; his daughter Patricia, husband Jim Watson, grandchildren Mathew and fiancé Liz McGrew, and Adam; daughter Nancy; son Kevin and wife, Melodie, grandchild Suzanne , and fiancé Dan Barth; and great granddaughters Alyssa, Brianna, and Hannah; extended family members Glen Schrimsher, Carolyn Saft.
A sister-in-law, Betty Overmyer of Plymouth and brother-in-law Charles Triplet of Culver also survive with numerous nieces and nephews.
Friends will be welcomed by the family to visit and share memories on Saturday June 5, 2004 from 4 to 8 p.m. in the Johnson-Danielson Funeral Home, 1100 N. Michigan St. Plymouth, Ind
An I.O.O.F. Memorial service will be conducted at 8 p.m. Saturday in the funeral home, conducted by the Maxinkuckee I.O.O.F., of which he was a member. Memorial services for Glenn will be at 2:00 p.m. on Sunday June 6, 2004 in the Culver Wesley United Methodist Church, 511 School St., Culver with the pastor, Rev. Linda Craig and Rev. Doug Jividen of the Plymouth Baptist Church officiating. Burial will be in the Burr Oak Cemetery, Burr Oak, Indiana.
In lieu of flowers, the family requests memorial gifts in Glenn’s memory may be made to the Glenn L. Overmyer (GLO) Scholarship Fund, to benefit a Culver Community High School student, c/o The Marshall County Community Foundation, 2701 N. Michigan St. Plymouth, Indiana 46563 or the Wesley United Methodist Church.