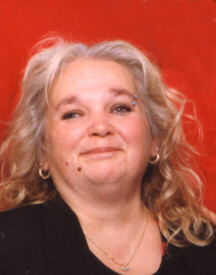 Goldie M. Rhoads, 54, passed away at her home in the company and care of her dear family, following a prolonged illness at 11:50 am on Thursday, July 18, 2013.
Formerly of St. Joseph County, Goldie had lived in Plymouth for 37 years.
She was born in Elkhart on August 11, 1958, the daughter of Louis A. and Dorthy E. (Sutterby) Kane.
Goldie attended LaVille Schools and on April 15, 1978, married Darwin W. Rhoads in Plymouth.
A homemaker, she adored her family, her children and her grandchildren. She was everyone’s “second mom.”
Goldie is survived by her husband of 35 years, her mother, Dorthy, and her four children.
They are: Bradley A. Sutterby, Argos: Brian J. (Melissa) Rouch, Plymouth: Veronica M. (Derek) Birchmeier, Plymouth, and Anna M. Rhoads, at home.
Seven grandchildren: Elizabeth, Emily, Xavier, Kingston, Xander, Xaylen and Brady also survive together with three sisters: Isabelle Willard, April Willard and Bobbie Allen, all of Elkhart. Many nieces and nephews survive as well.
Goldie was preceded in death by her father, Louis.
Friends will be welcomed at a visitation for Goldie from 2 to 4 p.m. on Sunday, July 21, 2013, at the Johnson-Danielson Funeral Home, 1100 N. Michigan St., Plymouth.
Funeral services, officiated by the Rev. Herb Hiatt, pastor of the Church of the Heartland, Plymouth where Goldie attended services, will follow visitation at 4 p.m. Graveside rites will be on Monday, July 22, at 10 a.m. in New Oakhill Cemetery.
Memorial gifts in Goldie’s memory may be given to the family.