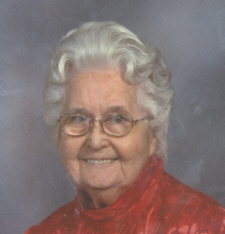 Goldie Pearl Greer, 84, 2000 Westgate Avenue, Plymouth, died, under the loving care of her family and Hospice, at 4:10 a.m. on Thursday, January 15, 2009, at the home of her niece, 11122 Forest Drive.
Goldie was born in Donaldson, IN. on April 24, 1924. She was the daughter of John T. and Ada Watkins Gaines.
She graduated from Plymouth High School.
Goldie was first married to Herbert Daley who died in the invasion of Normandy during W.W. II. She married Frederick Greer on January 6, 1945. Frederick died in 1991.
Goldie retired from United Technology after over 20 years of service.
She was an avid bowler, bowled in mixed leagues and in the Queen Bee League. She enjoyed fishing with Fred and was a great baker, making beautiful wedding cakes for friends and family.
Goldie attended the Shiloh Wesleyan Church and was a former member of the Church of the Nazarene, Plymouth.
Goldie is survived by a sister, Margaurite “Maggie” McHargue, Plymouth, and a brother, John Gaines, also of Plymouth. Several nieces and nephews survive as well.
She was preceded in death by her parents, her two husbands and a son, Randy. Two brothers, Charles and Herbert and four sisters: Maudie, Norma Jean, Minerva and Evalena, have also died.
Friends are invited to share their memories of Goldie with her family on Sunday, January 18, 2009, from 2 to 6 p.m. in the Johnson-Danielson Funeral Home, 1100 N. Michigan St., Plymouth.
Funeral services will be held on Monday, January 19, 2009, at 11 a.m., with calling one-hour prior to services, at the Shiloh Wesleyan Church, 10532 4B Road, Plymouth. The Rev. John Perkinson, pastor of the church, will officiate.
Burial will be in New Oakhill Cemetery, Plymouth, IN.
Memorial gifts in Goldie’s memory may be made to the Shiloh Church or to Hospice.