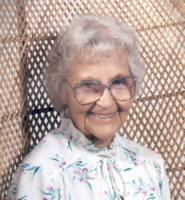 Goldie Ritter, 94, died of natural causes on Friday, November 7, 2003, at 3:25 p.m., in the Ironwood Health and Rehab Center, South Bend, Indiana. She had lived all of her life in Marshall County.
Born in Plymouth on April 14, 1909, Goldie was the daughter of Wilber and Magnolia VanBlaricom Felts. She attended Plymouth schools.
In December of 1948, in Plymouth, Goldie and Floyd Ritter were married. Floyd died in August of 1989.
A housewife, she was a member the Assembly of God. Goldie enjoyed reading, crocheting, and taking long walks.
Goldie is survived by two daughters: Janet Ross of Columbia City, Ind., and Joann (Allie) Siade, of South Bend.
Two grandchildren, Laurie Peare and Rick Horn and seven great and seven great-great grandchildren, survive as well.
Goldie was preceded in death by her parents, her husband and nine siblings. Six sisters: Cora Huffer, Maude Huffer, Marjorie Ludwig, Ruby Ralston and Mary Keevey, and Esther Jackson have died, as have three brothers: Lester, Robert and Thomas Felts.
Two grandchildren, Allen Ross and Debra Horn have also died before her.
Visitation in the Johnson-Danielson Funeral Home will take place on Tuesday, November 11, 2003, from 12 to 2 p.m. Funeral services will follow visitation in the funeral home at 2:00 p.m. The Rev Edgar Allen will officiate.
Burial will be in New Oakhill Cemetery, Plymouth.
Memorial gifts may be made a charity of the donor’s choice.