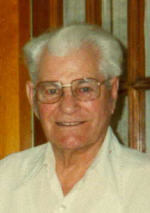 Gordon A. “ Gordy” Smith, 93, died of natural causes at 6:15 p.m. on Monday, Nov. 12, 2001, in the Walnut Creek Care Center, Plymouth. Gordy grew up in Illinois, Wisconsin and Michigan, but had spent most of his life in the Rochester, Plymouth and Argos areas. Born the son of Curtis E. and Etta Fay Gordon Smith, he was born on Jan. 7, 1908, in Tiosa, Ind. He was educated in Michigan schools and later attended a drafting school at night. On June 15, 1930, at her parents home in Fulton County, Ind., Gordy and Lola F. Munn were married in a double ceremony with Lola’s sister Ethel, and Gilbert Simons, by the Rev. Ralph Handchew. Gordy’s first job, for 15 years, was as a foreman at Edwards Iron Works in South Bend. He farmed for several years and then became a self-employed contractor doing business as Smith Remodeling Service. Later he became the first building inspector for Marshall County. An avid fisherman, Gordy enjoyed woodworking, rabbit hunting and being with his family. He loved to travel and visited most of the United States and a number of foreign countries. Gordy was a member of the Mt. Pleasant Church of the Brethren where he was a Deacon for six years. He was also a member of Gideons International and was on the Boards of Directors of the Marshall County REMC and Farmer’s Mutual Insurance. He is survived by his Lola, his wife of 71 years and by their two daughters and sons-in-law: Doris L. and Don Davidson, Inwood, Ind., and Norma Jean and Dwight Carlisle, Fresno, Calif. Eight grandchildren, fifteen great-grandchildren and three great-great-grandchild also survive together with four sisters and a brother. The sisters are Thelma Peddycord, North Liberty, Ind., Miriam and Don Badgley, South Bend and Ardelle Campbell and Helen Durham, both of Mishawaka, Ind. His brother is Paul Smith of Elkhart. Gordy is preceded in death by his parents and one brother, Harold D. Smith. Visitation will be on Thursday, Nov. 15, 2001, from 4 to 8 p.m. in the Johnson-Danielson Funeral Home, 1100 N. Michigan St., Plymouth. Funeral services will be in the funeral home at 10:30 a.m. on Friday, Nov. 16, 2001. The Rev. Alice Archer, pastor of the Mt. Pleasant Church of the Brethren will officiate. Burial will be in New Oakhill Cemetery, Plymouth, Ind. Memorial gifts in Gordy’s memory may be made to Gideon International and the Mt. Pleasant Church of the Brethren.