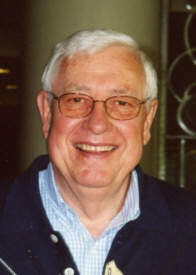 Gordon Clark Taiclet, 83, passed away peacefully surrounded by his loving family on Tuesday morning, May 3, 2016 in the St. Joseph Regional Medical Center, Plymouth Campus. He was a former resident of Monterey and Argos.
Gordon will be remembered as a loving Husband, Father, Grandfather, Great-Grandfather, as well as a businessman, philanthropist, community volunteer, and devout Catholic. Gordon was born in Warren, Ohio on July 27, 1932 to Louis C. and Mabel I. (Clark) Taiclet and following his mother’s death at an early age was raised by his father and step-mother Esther V. Taiclet who have all preceded him in death. After graduating from Oxford Stewart High School where he lettered in basketball and football, he attended the University of Notre Dame for one year and then attained his B.S. Business from Miami University in 1954. Gordon also attended multiple business management seminars at Harvard University throughout his business career.
Gordon married his high school sweetheart, Dorothy “Dot” Mae Byrge. In 1954, the couple moved to the Monterey area.
After college, Gordon joined his father, Louis, in their family owned country elevator business involving grain, feed, fertilizer and farm related services named Buckeye Feed & Supply, Inc. and later named Buckeye Ag-Center, Inc. The business grew from one location to five locations (Monterey, Leiters Ford, Winamac, Argos, and Kewanna) and employed hundreds of colleagues in these businesses that were integral parts of their local communities.
A hard working man and entrepreneur, Gordon was involved in many ventures, including poultry and hog livestock production. He also owned and operated a small cattle operation and family farm for approximately 20 years. As part of his business, he founded and created the Tippecanoe Railroad Company in 1980 and created one of the first successful short line railroads in the country.
Gordon was an active volunteer in numerous community organizations. He served as three term director of the National Grain and Feed Association, serving on the executive board and national transportation committee. Gordon was a three-term director and two-term president of the Indiana Grain and Feed Association. He was past president of the Monterey Lions Club and Argos Lions Club. He was a member of the Knights of Columbus Council. He was past president and board member of the Marshall County Community Foundation. He has served as Trustee and Board Secretary for Ancilla College and founding director of the Holy Family Foundation in Monterey, Indiana. Gordon was known for his special football tailgate parties throughout the Notre Dame Football seasons and for his love of ND basketball, where he was a season ticket holder for over 40 years. He was an avid traveler and fisherman. He loved playing cards and storytelling. Gordon was very interest-ed in international cultures and sponsored twelve foreign exchange students, many have remained friends.
In summary, Gordon’s best friend said of Gordon – “Many people loved him because he gave so much love to so many.”
Gordon is survived by his sweetheart and wife of 64 years, Dot, and their six children: Terri J. (Dr. John) Ewalt of Madison, WI, Pamela M. (Michael) Rarick of Beavercreek, OH, Barbara A. (Jim) Toussaint of Knoxville, TN, Danny C. (Marlene) Taiclet of Plymouth, David L. (Kathey) Taiclet of St. Louis, MO and son-in-law, Cress (Lynn) Hizer of Indianapolis, IN; as well as, 22 grandchildren and 9 great-grandchildren. He is also survived by his sisters – Lois Poort, Carol Domingo, Betty Chester, and Margie Taiclet.
He was preceded in death by his parents, his daughter Rebecca Taiclet Hizer, and his sister Leah Chapman.
Visitation will be on Friday, May 6, 2016 from 3-8 p.m. EDT in the Johnson-Danielson Funeral Home, 1100 N. Michigan Street, Plymouth. Mass of Christian Burial will be held at 10:00 a.m. EDT on Saturday, May 7, 2016 in the St. Michael Catholic Church, 613 N. Center Street, Plymouth.
Burial will follow in the St. Anne’s Catholic Cemetery in Monterey, Indiana. A celebration of Gordon’s life and a reception for friends and family will begin at 1 p.m. EDT at Swan Lake Resort 5203 Plymouth-LaPorte Trail, Plymouth.
Memorial contributions can be made to the Rebecca Taiclet-Hizer Memorial Scholarship for Cancer Research at the University of Notre Dame, the Boys and Girls Club of Marshall County, or the Marshall County Community Foundation to the Taiclet Family Fund for Agricultural Excellence at Ancilla College.