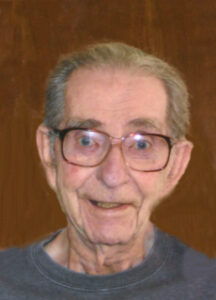 Gordon E. “Bud” Parker, 95, died at 10:00 a.m. on Monday, January 7, 2008, in Miller’s Merry Manor, Columbia City, IN. He had been a Plymouth resident since 1950, coming from Downers Grove, Illinois and establishing his home on the Plymouth-Goshen Trail until 1993. He moved to River Park for the next seven years and then Miller’s Merry Manor, Plymouth, until one month ago, when he was transferred to Columbia City.
Born in LaPaz, IN. on April 16, 1912 and raised on the County-Line Road, Gordon was the son of Emory M. and Olive W. Bechtal Parker. He graduated from Lakeville High School with the class of 1930 and Purdue University in 1934 with a Degree in Civil Engineering. He later did Post Graduate Studies at Purdue. On December 22, 1935, Gordon and Helen V. Rowe (daughter of Harry and Erma Rowe) were married in Lakeville. Helen preceded Gordon in death on January 31, 2006.
Gordon taught Math and Industrial arts at Lakeville High School for six years, then was Superintendent of Construction for Swift & Company – Globe Engineering for 33 years, retiring in 1974. He enjoyed working in his lawn and garden and was an avid Cross-word puzzle fan.
Gordon is survived by a daughter: Sandra and Robert Thomas of Columbia City, IN, a son: Larry G. and Virgie Parker of Tallahassee, FL, seven grandchildren, twelve great grandchildren and a sister: Carmen Fetters of Jacksonville, Florida.
He was preceded in death by his parents and his wife.
Friends will be welcomed on Thursday, January 10, 2008, from 6 to 8 p.m. in the Johnson-Danielson Funeral Home, 1100 N. Michigan St., Plymouth.
A celebration of his life will be at 10:00 a.m. on Friday, January 11, 2008, in the funeral home. Rev. Joel Thomas, Gordon’s grandson, and Rev. Ruth Yoder, Pastor of the Plymouth Church of the Brethren, of which Gordon was a member, will officiate.
Burial will follow in the Bremen Cemetery, Bremen, IN.
Memorial gifts in Gordon’s memory may be made to the Plymouth Church of the Brethren.