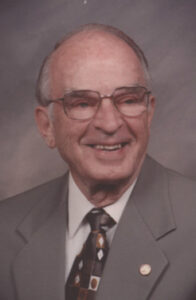 Gordon Floyd “Gordy” Nelson, 92, a lifelong resident of the Plymouth Community, passed away on Wednesday morning at 6 a.m., August 20, 2014 at Saint Joseph Regional Medical Center-Plymouth Campus. Gordy was born on January 22, 1922 to Walter John and Stella May (Fletcher) Nelson in Plymouth. He graduated with the Plymouth High School Class of 1939. In 1953 he started working for the Indiana Motor Bus Company where he was first a ticket agent and then became the office manager for bookkeeping. He retired after 34 years of service in 1987. He was a dedicated member for 62 years at the Plymouth Kilwinning Masonic Lodge No. 149, having served as a Past Master and then Secretary many years and was nominated and elected to the high honor of the Order of Service to Masonry by Grand Lodge of Free and Accepted Masons in 2006. He was a former member of the South Bend Scottish Rite – Valley of St. Joe. He lived a Christian example and was a lifetime member of the Trinity United Methodist Church where he was a usher for 70 years and a head usher for 5 years. He played Santa Claus for several families and organizations for 35 years. He was awarded Sagamore of the Wabash by Governor Frank O’Bannon in 2002.
Gordon is survived by his sisters; Joan M. (Fred) Wolff, Rosemarie Campbell and Helen L. (Mick) Nelson, his sister-in-law Darlene G. Brundige all of Plymouth. His nephews include: Phil (Patti) Nelson, Tim Nelson, Larry (Ammee) Girten, Bill (Donna) Girten, Bob Girten, Mike (Norvetta) Wolff, Craig (Jo Ellen) Campbell, Kevin Campbell, Kent (Lisa) Campbell and Steven (Terri) Nelson, and nieces: Chris (Don) Marohn, Rhonda (Bob) Arvesen, Dee (Jim) Brown, Lynn (Steven) Jacox, Anne Gantz, Pat Girten, Barb (Joe) Holcomb and Deb Stout. He is also survived by 31 great nieces and nephews and 39 great, great nieces and nephews. He was preceded in death by his parents, his brother Jim Nelson, his brothers and sister-in-laws Wayne R. (Mildred I.)Nelson and Wendell E. (Treva) Nelson, his sister and brother-in-law Mary R. (Harry) Girten, his niece Jane Louise Girten, and his brother-in-law Ernest W. Campbell. Family and friends with gather to celebrate his life on Friday, August 22nd from 2:00 p.m. to 8:00 p.m. in the Johnson-Danielson Funeral Home, 1100 N. Michigan St., Plymouth. A Masonic Rite will be held that evening at 7:30 p.m. in the funeral home. Funeral services will be held in the Trinity United Methodist Church on Saturday, August 23rd at 11:00 a.m. with Pastor Mark Need and Michael Burroughs officiating. Visitation will continue after 10:00 a.m. until the funeral service in the church. Burial will follow in the New Oakhill Cemetery.
Memorial Contributions can be made to the Masonic Lodge Scholarship Fund, 109 Water Street, Plymouth Indiana 46563 and Trinity United Methodist Church Memorial Fund, 425 S. Michigan Street, Plymouth Indiana 46563.