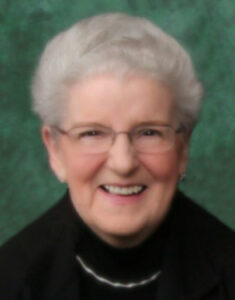 Former Plymouth resident, Grace A. Hutchings, 88, entered into heaven December 7, 2015 at her home with her family by her side. Grace was born to Reverend Arthur F. and Ollie (Johnson) Long in St. Joseph County, Indiana September 11, 1927. She was raised on an Indiana farm and graduated from Tyner High School in 1945.
She worked at the Indiana Motor Company where she met the love of her life, John J. Hutchings. The couple was married October 20, 1951 in Plymouth Indiana. The couple celebrated their 59th anniversary in 2010 prior to John’s passing on February 19, 2011. Grace became a full time stay at home mom after the birth of her first child. During those years her children have fond memories of helping Grace refill Lions Club nickel candy machines across the South Bend Area. After her children were raised, she worked as a bookkeeper for Barnes Electric Co. and later Koehler Insurance Co. After retiring, she became the President of their Home Owner Association.
In the summer of 2004, she and John moved to Enid and worked in their daughter and son-in-law’s McDonald’s Restaurants. She fulfilled many administrative roles from Payroll to Teacher of the Month. She was a member of the Evangel Heights United Methodist Church, the Psi Iota Xi sorority and was recently interviewed for a book about Americans born on 9-11. She was famous for her cooking and candy making.
She is survived by her daughters, Lynn Biddle and husband Steve of Enid Oklahoma, Cris Dycus and Lester Sellers of Bourbon Indiana; son, Jeff Hutchings and Anna Ricci of South Bend Indiana; Six grandchildren, three great-grandchildren and a sister, Mary Dare of Teegarden, Indiana also survive. She was preceded in death by her husband, her parents, brothers Glenn and Arthur Long and sisters Betty Geible and Doris Lamborn.
The family will receive friends in Plymouth at the Johnson-Danielson Funeral Home, 1100 N. Michigan Street, from 4-7 p.m. EDT on Tuesday, December 15, 2015.
A Memorial Service will be held at 11:00 a.m. on Wednesday, December 16, 2015 in the Plymouth Church of the Brethren, 1130 N. Michigan Street, Plymouth with Rev. Don Johnson, of Central Christian Church in Enid, Oklahoma, officiating. Calling will resume in the church from 10 a.m. until time of services.
Burial will be held at a later date.
Memorial contributions may be made in her name to Ronald McDonald House Charities of Michiana, P.O. Box 1274, South Bend, IN 46624 or the Hospice Circle of Love Hospice, Enid, OK.