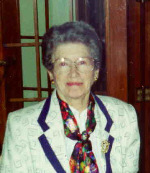 Grace M. Baker Nifong, 88, a resident of Pilgrim Manor Nursing Home, Plymouth, since Dec. 14th., died there of natural causes, at 10:55 p.m. on Saturday, Dec. 22, 2001. Grace was formerly a 60-year resident of South Bend. Born in Plymouth on Aug. 30, 1913, she was a twin daughter of Samuel P. and Alta M. Foreman Baker. Her twin sister, Gladys Gardner, died on May 29, 1991. Grace graduated from West High School with the class of 1932. Completing her education at South Bend Business College, she worked for Associates of South Bend before becoming a mother and homemaker. She later worked for 16 years as the office manager of the First United Methodist Church of South Bend, retiring in 1979. Thereafter she donated her time to charities such as the Thrift Store in Mishawaka. Grace was an active member of Grace United Methodist Church of South Bend. She enjoyed visiting shut-in members. She also was interested in genealogy and was a member of the Schuyler Colfax Chapter of the Daughters of the American Revolution. A talented china painter, she enjoyed painting tea sets and dishes for her family and friends. She loved to travel and had visited Europe, the Holy Land, and the state of Hawaii. On May 9, 1938, Grace and Rolland C. Matz of Tyner were married in Plymouth; Roland died in 1963. Seventeen years later, on June 21, 1980, she married Harold R. Fisher of Fort Seybert, West Virginia. He died on Feb. 11, 1999, after a lengthy illness. Grace married Cyrus Nifong of Plymouth on June 12, 1999. The couple lived at 9331 Quince Rd., Plymouth. Grace is remembered for her strong sense of family. Following the traditions set by her mother, Grace delighted in bringing the whole family together for celebrations. She is revered for being a wonderful wife, mother, grandmother, great-grandmother, sister, aunt and friend to many. Grace is survived by her husband, Cyrus, and her son and daughter-in-law, Karl R. and Barbara Matz of McPherson, Kan. Her pride and joy, two granddaughters, also survive. They are: Michelle K. and Todd Huddle, McPherson, Kan. and Jennifer R. and Mike Vermeulen together with two great-grandsons, Jacob and Andrew Vermeulen, all of South Bend. A brother, Orville and Pauline Baker, South Bend, survives as well. Other surviving family members are her beloved nephew Dan Gardner and his family of Osceola, a much loved niece, Dawn Brown and her family of Colorado Springs, Colo., other nieces and nephews, including Judy Hite, Plymouth, and four step-sons and their families: Loren and Shirley Nifong, Plymouth; Larry and Sarah Nifong, Walkerton; Ronald and Clare Nifong of Ft. Wayne and Ross Nifong, Plymouth, including fifteen step grandchildren and eleven step great-grandchildren. She was also preceded in death by two brothers, Samuel P. Baker Jr, and Kenneth Baker, along with a sister Clarice Volkman. Friends may celebrate the life of Grace Nifong with her family from 2 to 4 and 6 to 8 p.m. on Wednesday, Dec. 26, 2001, at the Johnson-Danielson Funeral Home, 1100 N. Michigan St., Plymouth, and for one hour prior to funeral services in the church on Thursday. The Rev. Ross Cook, of Nappanee and Rev. Deb Peterson of the Union Church of the Brethren will officiate at the funeral services in the Union Church of the Brethren, 10483 St. Road 17, Plymouth, at 10:30 a.m. on Thursday, Dec. 27, 2001. A graveside burial service will be held at 2:30 p.m. Thursday, in St. Joseph Valley Cemetery, 375 W. Cleveland Road, Granger, Ind. Memorial gifts in Grace’s memory may be given to the Marshall County Hospice or to the Union Church of the Brethren.