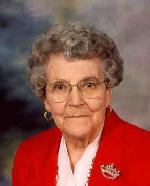 Grace M. Koontz, 96, a lifetime resident of Marshall County , died at 8 a.m. Monday, September 16, 2002 at the Plymouth home of her daughter Mary Jane Yates-Faurote. Grace died of natural causes in the loving care of her family. She had resided at 6069 King Road , Plymouth since her marriage in1925. Grace was born April 30, 1906 , at home on the family farm the daughter of Allen B. and Matilda A. Heyde Cummins. She was a 1923 graduate of Plymouth ’s Lincoln High School .
On October 11, 1925 , at the home of her parents, Grace became the bride of Harold W. Koontz, he preceded her in death on November 18, 1981 .
Following high school, Grace worked at the Marshall County Bank & Trust until her marriage after which she assisted her husband on the family farm and became a mother and homemaker.
For over fifty years she attended the Shiloh Wesleyan Church and was a charter and faithful member of the Helpful Hour Home Economics Club for nearly 70 years.
She enjoyed traveling and music, especially Gospel and Country/Western, which led her to one of her favorite destinations, Branson , Missouri .
Grace is survived by a son Donald D. (Betty) Koontz of Plymouth, two daughters; Mary Jane Yates-Faurote also of Plymouth and Carol A. Warmbrod of Rochester , Ind. Eight grandchildren survive they include; Jim L. ( Nancy ) Yates of Goshen, Jeffrey K. (Judi) Yates of Plymouth, Thomas G. Koontz of Puerto Rico, Jacqueline S. (John) Moorical of South Bend, Tammy S. (Joel) Devine of Argos, Robin L. (Michael) Schmucker of Nappanee, Trudy K. (Tom) Stearns of Plymouth and Terrie A. (Stephen) Jackson of Cape Girardeau, Missouri along with fifteen great grandchildren and 3 great great grandchildren. Two nephews Richard L. (Donna) Cummins of Plymouth and Allen H. (Marjorie) Cummins of Lafayette, Ind. also survive.
Grace was preceded in death by her husband, a brother George Cummins and three sons-in-law; they are Jim L. Yates, Richard E. Faurote and Carl I. Warmbrod.
Friends may visit with the family from 4 – 8 p.m. Wednesday, September 18th in the Johnson-Danielson Funeral Home, 1100 N. Michigan St. Plymouth . Services will be held in the funeral home at 10:30 a. m. Thursday, September 19th, the Rev. John Perkinson, Pastor of the Shiloh Wesleyan Church will officiate.
Burial will take place in the New Oakhill Cemetery , Plymouth .
Memorial gifts in Grace’s memory may be made to the Shiloh Wesleyan Church , 10532 4B Road, Plymouth , Ind. 46563