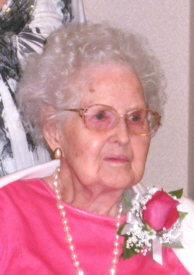 Grace Madeline Woodfill, lived most of her 100 years in Marshall County. She died on February 11, 2013 at the Catherine Kasper Life Center, Donaldson, IN., having been a resident there for the past six years.
Grace was born in Michigan City, IN., on May 23, 1912, the daughter of Louie and Mary (Barfknecht) Peters. She grew up with three siblings: Viola Peters Price, Elmer Peters and Wilmer Peters.
Grace lived on several farms as she grew up. She loved the outdoors and farm animals, loved milking the cows and other farm chores. At that time, the children rode to Washington school in Plymouth in a hack.
Grace graduated from West High School in 1930, and attended nurses training in Chicago, afterwards working there for several years. Back in Plymouth, she did housework in the area, including working at the Danielson Funeral Home.
Grace was married to William Holmes “Casey” Woodfill on June 25, 1939, in the family home in Linkville.
They started a family when Carol arrived in 1941, followed by Sue, Mary Grace and Jean. They were married 55 years until Casey’s death in 1994.
Grace had many hobbies. She loved her African violets as well as her perennial flower beds. She had a vegetable garden and canned her produce extensively.
She embroidered beautifully and started quilting projects as a young girl. Through the years she completed five quilts for herself and her four daughters.
She was an active member in the First United Methodist Church since 1922 until her health made attendance impossible.
She enjoyed singing in the church choir for many years and belonged to several church organizations including the Tyra Constance Guild, Mother’s club and W.S.C.S.
Grace was also a member of the Purdue Extension Homemaker’s Club for almost 40 years.
In 1956, Grace resumed her nursing career, working as an aide at Parkview Hospital, primarily in the Obstetric Department. She retired at age 70, after 29 ½ years of service.
At age 60, Grace learned to drive a car, actually taking Driver’s Ed at Plymouth High School.
Grace was preceded in death by her parents, her siblings and her husband.
She is survived by her daughters: Carol Johnson, Plymouth, Sue (Alan) Milligan, Franklin, IN., Mary Grace (Chester) Oakes, Goodyear, AZ., and Jean (Delmas) Marshall, Rochester, IN.
Grandchildren include: Luther Johnson, CA., Andrea (David) Carr, Osceola, IN., Monica Johnson, Kokomo, IN., Scott Milligan, Nineveh, IN., Kim Henry and fiancé Jeff Hegedus, Jamestown, IN., Kellie (Andrew) Gordon, New Whiteland, IN., Elisabeth Marshall, Loganville, GA., and Anna (Rob) Latham, Louisville, KY.
Grace’s great-grandchildren are: Matthew (Allison) Collins, South Bend, IN., Jessica (Corey) Cole, Osceola, IN., Cody Collins, Osceola, IN., Ashley, Henry, Ali Hegedus and Cole Henry, all of Jamestown, IN, and Bailey Milligan Gordon, Graham Gordon and Jacob Gordon, all of New Whiteland, IN.
Grace also has two great-great-grandchildren: Gabriel Cole and Bella Cole of Osceola, IN.
Visitation will be on Monday, February 18, 2013, from 3 to 7 p.m. in the Johnson-Danielson Funeral Home, 1100 N. Michigan St., Plymouth, IN and continue on Tuesday, February 19, 2013, after 10 a.m.
Funeral services will be held following visitation on Tuesday at 11 AM in the funeral home. The Rev. Larry Marhanka, pastor of the First United Methodist Church will officiate.
Burial will be in Oakhill Cemetery, Plymouth.
A memorial service will be held at the Catherine Kasper Chapel at 3 p.m. on Tuesday, February 19, 2013.
Memorial contributions may be made to the First United Methodist Church, 400 N. Michigan St., Plymouth, IN 46563, Catherine Kasper Life Center, P.O. Box 1, Donaldson, IN 46513 or the American Lung Association, 1301 Pennsylvania Ave., NW Suite 800, Washington, DC 20004.