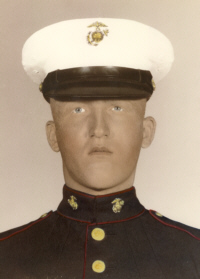 Gregory M. Staples, 1027 E. Fox St., South Bend, formerly of Plymouth, died in Parkview Hospital, Fort Wayne, Indiana, of natural causes at 3 p.m. on Thursday, March 16, 2006
Greg was 56 years-old.
He was born in South Bend on July 24, 1949, the son of Clint and Cleo Arndt Staples.
Greg served his country as a Lance Corporal in the United States Marine Corps in Vietnam where he was awarded two Purple Hearts and a Bronze Star for bravery in combat.
Greg was very talented musically. He played numerous musical instruments including the harp and the flute.
He enjoyed reading all kinds of literature.
Greg is survived by three sons: Noah Staples, South Bend, Indiana and Adam and Simon Staples, both of Chicago, Illinois.
Three sisters and two brothers also survive his death. His sisters are Cindy and Brian Claeys, Plymouth; Pam Staples Toner, South Bend, Indiana, and Janice and Joe Frucci, also of South Bend. His brothers are Paul and Judy Staples, Plymouth, and Kevin and Valerie Staples, South Bend.
Eleven nieces and nephews survive as well.
Greg was preceded in death by his father, and his two mothers, his birth-mother and his mother that raised him..
Friends will be welcomed by his family on Sunday, March 19, 2006, from 2 to 4 p.m. at the Johnson-Danielson Funeral Home, 1100 N. Michigan St., Plymouth.
Funeral services will follow visitation in the funeral home at 4 p.m. Memorial contributions may be made to the family in Greg’s memory.