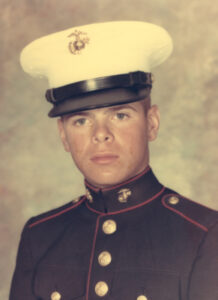 United States Marine Corps Retired, Gunnery Sergeant Gregory M. Pozorski, 61, passed away at his Argos home on Saturday, October 5, 2013 of natural causes.
Greg was born the only child of Ambrose M. and Loretta A. (Harness) Pozorski on December 30, 1951 in Plymouth. Greg attended St. Michael Elementary School and graduated from Plymouth High School in the Class of 1970. He continued course studies at I.U.S.B.
He entered active duty during the Vietnam War and provided 20 years of guard duty service in the Corps., stationed at several U.S. Embassies and received several commendations. After retirement he worked various jobs in the area.
Greg was an avid coin and gun collector, enjoyed hunting, reading and his beloved cat, “Sam”.
He was a member of St. Michael Roman Catholic Church and Veterans of Foreign Wars – Marshall County Post 1162.
His parents preceded him in death and is survived by his extended family that includes: aunts and uncles, Mila “Toody” (Dick) Young of Culver, Jerry Harness of Florida, Susan (Bob) Fort of Knox, Peggy Harness of Knox, Jeff (Pat) Harness of Plymouth, Florence “Polly” Matthews of Kansas, Mary Ann Best of Indianapolis, Francis “Joe” (Kathy) Pozorski of Kokomo, Evelyn “Lindy” Pozorski of Plymouth, great aunt Margaret Petron of Donaldson and several enjoyable cousins.
Visitation will be held on Tuesday, October 8th from 5 – 8 p.m. in the Johnson-Danielson Funeral Home, 1100 N. Michigan St., Plymouth. A rosary will be recited at 7:30 that evening.
Mass of Christian Burial will be offered by Fr. John Korcsmar C.S.C. on Wednesday, October 9th at 11 a.m. in St. Michael Catholic Church, 613 N. Center St., Plymouth, where friends may call after 10:30 a.m. until time of service.
Military Honors will be accorded G/Sgt Pozorski immediately following provided by the United States Marine Corps and members of the Plymouth American Legion Post 27, V.F.W. Post 1162 and the D.A.V.
Preferred are memorial gifts to the American Diabetes Association, 6415 Castleway W. Drive, Indianapolis, IN 46250