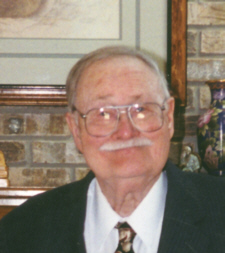 H. Byron Landholt, died of natural causes on October 29, 2006, in Saint Joseph Regional Medical Center, Plymouth. He was 88-years old.
A loving husband and father, Byron was a life-long music lover. He sang as a soloist in college and performed in several churches.
Highly respected, Byron was the Executive Director of hospitals in Illinois, Oklahoma, Nebraska, Michigan and New York.
Born in Springfield, Illinois on March 24, 1918, he was the son of Harry and Izetta Purcell Landholt.
He was a graduate of Blackburn College, Carlinville, Illinois, and Illinois College, Jacksonville, Illinois. He studied at Gradwohl Laboratory and X-Ray, St. Louis, Missouri, and took anesthesia classes at Augustana Hospital, Chicago, Illinois.
His post graduate work was at Oklahoma University, Norman, Oklahoma.
On August 30, 1941, in Hillsboro, Illinois, Byron and Geraldine Strange were married.
Byron was a Life Diplomate of the American College of Healthcare Executives and a member of the Management Systems Society, the Royal Society of Health and the National Association of Clinic Managers.
He was a member of the Masonic Lodge, Cass City, Michigan, and a 32nd Degree Mason, Bay City, Michigan, Michigan Consistory.
Byron was a member and Deacon of the First Presbyterian Church of Plymouth, whose pastors and congregation provided Byron and Jeri with much spiritual and moral support through a long, difficult time. Listed in Who’s Who in the Midwest, Byron was also a member of the American Hospital Association, the National Genealogical Society and past president of the Hospital Council of Illinois-Indiana.
Byron is survived by Jeri, his loving wife of 65 years and by his son and daughter-in-law, William and Barbara Landholt of Naperville, Illinois, and his daughter, Julie Landholt of Los Angeles, California.
Donna Burrows, fiancée of David Landholt, also survives.
Six grandchildren survive as well. They are Kimberly Landholt and Nickie Mauer of Naperville, Illinois: Nichole and Vaughn Holsopple of Columbus, Ohio: Cary and Aaliya Landholt of Plainfield, Illinois: Kristin Landholt, Los Angeles, California: Timothy Landholt and Heather Landholt of Columbia, South Carolina.
Three great-grandchildren also survive together with a sister and brother-in-law: Floy and Charles “Chop” Mayer of Plymouth, Indiana.
Byron was preceded in death by his parents and two sons, David Landholt of Columbia, South Carolina and James Landholt of New York, New York. Following Byron’s wishes there will be no funeral. A memorial service will be held at a later date at his son William’s home in Naperville, Illinois.
The Johnson-Danielson Funeral Home, 1100 N. Michigan St., Plymouth, is in charge of arrangements.
Memorials may be made to the First Presbyterian Church of Plymouth, Indiana.