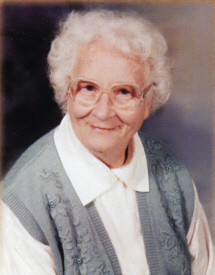 H. Catherine Berger, 91, of Plymouth, passed away at 3:55 AM Friday, October 7, 2016 in Pilgrim Manor.
She was born December 27, 1924 in Tippecanoe, Indiana, to the late Charles and Alta (Winterrowd) Best.
At the age of one, she moved with her family to Plymouth, but she graduated from LaPaz High School in 1942. While in school, she met and married her high school classmate, Richard Berger on July 27, 1944. He preceded her in death in 1990.
Her hobbies where flowers, mainly roses, but she also enjoyed feeding birds and doing cross stitching. She was a member and attended Shiloh Wesleyan Church for over eighty years. Catherine and her sister; Marjorie were the janitorâ€™s at the church for twenty-three years. Catherine loved her family and all her friends very much. Surviving are her two children; Donna Tyler, Charles (Sue) Berger, all of Plymouth, five grandchildren; Gayle (Leon) Thompson of Roanoke, Virginia, Bradlee Tyler of Plymouth, Tony (Shelly) Berger, Andy (Jenny) Berger, and April Rueckheim, all of Wisconsin. Also surviving are four great-grandchildren; Brianne, Kylie, Eathan and Shea Berger all of Wisconsin, and one sister; Marjorie Best of Plymouth.
She was preceded in death by her parents and husband.
Visitation will be from 11-1 p.m. on Tuesday, October 11, 2016 in the Johnson-Danielson Funeral Home, 1100 North Michigan Street, Plymouth. Funeral services will immediately follow in the funeral home at 1 p.m. with Pastor Richard Van Vuren officiating.
Burial will follow in the Bremen Cemetery.
Memorial contributions may be directed to the Shiloh Wesleyan Church Missions, 10532 4B Road, Plymouth, Indiana 46563.