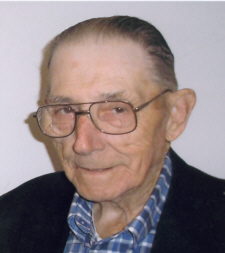 H. Dwight Burch, 90, a lifetime Walkerton resident, died of natural causes at his residence at 7:50 p.m. on Thursday, November 27, 2008.
Dwight was born at home in the Walkerton/Tyner area on October 21, 1918, the son of Chester H. and Blanche V. (Stull) Burch.
He graduated from Tyner High School with the class of 1936.
On the 21st of October, 1939, in the parsonage of the United Brethren Church in Tyner, Dwight and Pauline E. Baker were married.
A lifetime farmer, he was a popular and dependable school bus driver for 46 years for the Tyner and John Glenn school districts.
He enjoyed cutting wood, gardening and butchering—always sharing his bounty with others.
A lifelong member of the Blissville Church of the Brethren, he was an Indiana Farm Bureau member for over 52 years.
Dwight is survived by Pauline, his devoted spouse and by their two sons and families.
They are DuWayne P. (Becky) Burch, N. Liberty, IN., and Dennis L. (Linda) Burch, Mentone, IN. His grandchildren, who also survive are: Todd (Karen) Burch, Walkerton, and their children, Nathan and Eric: Tracey (Tom) Duff, Walkerton, and children, Tyler and Trevor: Dawn (Shawn) Campbell, Bremen, and children, Abby and Zach: Deanna (Scott) Greene, Niagara Falls, N.Y., Aaron, Isaac and Deborah Burch, Fort Wayne, IN.
Several nieces and nephews survive as well.
Dwight was preceded in death by his parents and a brother, Lloyd Burch.
Friends may visit with the family and remember the life of Dwight Burch on Monday, December 1, 2008, from 3 to 8 p.m. (EDT) in the Johnson-Danielson Funeral Home, 1100 N. Michigan St., Plymouth, IN.
Funeral services for Dwight will be at 10:30 a.m.(EDT) on Tuesday, December 2, 2008, at the Blissville Church of the Brethren, 6250 Spruce Trail, Plymouth with visitation one hour prior to services. The Rev. Dester Cummins, pastor of the church, will officiate.
Interment will follow in the Tyner Cemetery.
Memorial gifts in Dwight’s memory may be made to the Blissville Church or to The Center for Hospice and Palliative Care, 112 S. Center St., Plymouth, IN 46563.