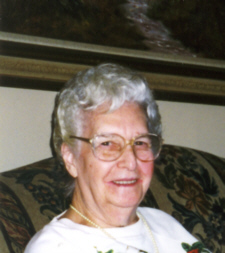 H. Eleanor Erickson, 97, of Plymouth died of natural causes at 12:30 p.m. Saturday, July 14, 2007 in the Pilgrim Manor Nursing Home. Eleanor has resided in Plymouth for the past ten years, coming from Chicago.
She was born in Cowden, Illinois on December 21, 1909, the daughter of Fred and Flora (Gross) Morris. She graduated from Cowden High School.
Eleanor became the bride of Elwood O. Erickson on May 12, 1940 in Chicago. He would precede her in death in 1985.
Convicted to her faith, Eleanor was an active member of the Northside Gospel Center in Chicago and later became a member of the Plymouth Baptist Church. Family was her most important asset and she was very much a part of their lives. She was also talented with her hands and especially enjoyed crocheting.
Surviving is a daughter Kathy A. Erickson of Plymouth with whom she made her home. Three grandchildren: James D. Weith and Michael W. (Darleen) Weith both of Arizona and Brenda K. (Keith) Norwick of Plymouth. Three great grandchildren include: Nicholas, Mariah and Jessica.
Preceding in death were her spouse, a son James R. Erickson, a sister Doris Conrad and two brothers John Morris and Hubert Morris.
Memorial services and a time of sharing will begin at 11 a.m. Thursday, July 19, 2007 in the Plymouth Baptist Church, 11345 9A Road, Plymouth. Pastor Douglas Jividen will officiate.
Gifts in memory of Eleanor may be given to the Plymouth Baptist Building Fund.