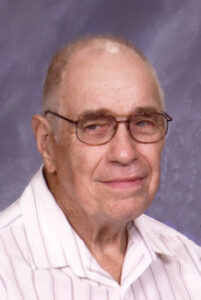 H. James “Jim” Lamb, 86, of 11108. 12th Road, Argos, passed away peacefully at 3:50 p.m. on Saturday, January 5, 2013, in Plymouth.
A longtime member of the farming community, Jim was born on August 25, 1926, in Elyria, Ohio, the son of Harris James and Elizabeth (Ton) Lamb.
He had lived in Elyria, Sandusky, and Cleveland, Ohio, before coming to the Plymouth area in 1938.
Jim graduated from Plymouth High School with the class of 1944 and served as a Seaman 1st Class in the United States Navy during World War II.
On September 7, 1947, Jim and Donna Hartman were married in Plymouth. The couple enjoyed traveling to the McAllen, Texas area for 25 winters.
Jim was a man of faith and an active and devoted member of the First United Methodist Church of Plymouth. He held numerous positions in the church and the Sunday school.
He was a member of the Farm Bureau and past president of the Marshall County Dairy Association. For eight years, Jim drove a school bus for the Union-North School District.
His zest for living, positive outlook, quiet strength and friendliness will be missed by all. For many years Jim would anonymously provide the hospital with flowers from his garden to be shared by the ‘Pink Ladies’ with those patients who had none only to know that he had brightened someone’s day.
Jim farmed from 1950, until selling his operation in 1987.
Jim is survived by his wife, Donna and by their two daughters; Charlotte M. Morgan of Springfield, Ill., and Ruth (Jon) VanVactor of Plymouth. A daughter-in-law; Trudy (Brad) Forkner of Cherry, Illinois also survives.
Seven grandchildren: Derek (Molly) Lamb, Ethan VanVactor, Angela (Lonny) Hurwitz, Scott (Holly) Baum, Sean (Jen) Parsons, Michelle Parsons and Abby Parsons survive as well, with seven great-grandchildren; Joshua Hurwitz, Samuel Hurwitz, Brendan Lamb, Tristan Lamb, Ryanne Baum, Emily Parsons and Coltrane Parsons. A sister, Sarah C. Whaley of Lake Jackson, Texas also survives.
Jim was preceded in death by his parents and by a son, Dale A. Lamb in 1981.
Friends may visit with the family from 3 – 7 p.m. on Thursday, January 10th at the Johnson-Danielson Funeral Home, 1100 N. Michigan St., Plymouth, and for one hour prior to an 11 a.m. service Friday, January 11th in the First United Methodist Church, 400 N. Michigan St., Plymouth. The Revs. Larry Marhanka and Jeff Herron will preside.
Interment will follow in the Whispering Pines addition of New Oakhill Cemetery, Plymouth where military honors will be accorded him by members of the Plymouth American Legion Post 27, Veterans of Foreign Wars – Marshall Co. Post 1162 and the D.A.V.
Preferred are memorial gifts in Jim’s memory to the First United Methodist Church, 400 N. Michigan St., Plymouth, IN 46563