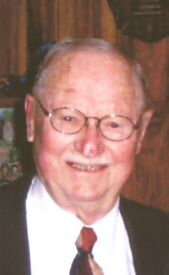 Hal Parks Groninger, 92, living at 220 West St., for the past 28 years, died of natural causes at his home in the care of his family and Hospice, at 7:25 a.m. on Monday morning, April 28, 2008. Hal had lived in Plymouth sixty years, coming from Carroll County.
Hal was quite a guy. Thirty-eight years ago, he won the annual Toastmaster’s Bull-Throwing Speech contest in South Bend.
He could have won it again—hands down, against anybody. No one could tell a story or a joke like Hal Groninger.
He will be greatly missed.
Born in Rockfield, Ind., between Logansport and Lafayette, on Nov. 11, 1915, Hal was the son of Parks Douglas and Ethel M. (Connarroe) Groninger. He graduated from Rockfield High School in 1933 and continued to help his father on the family farm.
On August 4, 1937, Hal and his childhood sweetheart, Mildred V. Bowman, were married in Rockfield. Mildred died on February 25, 1972. On January 1, 1973, he and Patsy Jo Wright were married in Plymouth.
He told folks that he, a self-proclaimed “people person,” had been so lonely and that ‘Patsy Jo” was the best thing that could have happened to him. They were married for 35 years and have five grandchildren and four great-grandchildren.
Hal never shied from work and he had plenty of different jobs. He worked in a ladies shoe store, earning $7 a week. He worked as a soda jerk at Fleming’s Ice Cream Parlor on Lincoln Way West in Mishawaka and he drove a semi for Drewry’s Brewery.
He was a mechanic and “a pretty good farmer.”
He was called up into the Army, but WWII ended before he had a chance to serve. After the war, he sold his farm and did landscaping with Morman Minerals.
But most of all, he was the consummate traveling salesman. He worked with various wholesale feed companies: Nappanee Milling and Sun Ray Wholesale Feed in Culver. He was with Syler’s Inc. in Plymouth for 17 years and later with Albers Milling for six more.
For ten years, Hal and Pat owned and operated, “Fun and Games Arcade” in Plymouth.
The person that had the most fun there was Hal.
His last job (for 14 years) until this past January was as he put it – a 92 year old “Bagger Boy” three days a week with Martin’s Grocery in Plymouth. He always had a smile and a joke for the ladies.
Until recently, he played duplicate bridge and did his own yard work. He loved to golf and read. He played poker and euchre and was a great Notre Dame fan.
A dedicated Presbyterian, he was a member of the First Presbyterian Church for the past 60 years. Hal testified that “the Lord helped me a lot. When I needed Him, He came down.”
Hal had kept a journal since 1982. In the back of Volume I are 432 rules to follow during the Christmas holidays. His philosophy was not to worry about the little things. Everyday is an important day.
He is survived by his loving wife, Pat and by four children. His daughter, Jane A. Bechaka lives in Chicago, Ill. She has a daughter, Nicole. A son, Douglas L. and his wife, Rhonda, are in Colorado Springs, Colo. Their children are Douglas Jr., Mara and Lee.
Hal also has twin sons, Garry Parks and Valerie Groninger, San Jose, Calif., and Garry’s daughter Carly and Larry Earl and Debra Groninger, Colorado Springs, Colo.
Four great-grandchildren also survive together with a sister, Love C. Fitzgerald, Indianapolis, Ind.
Hal was also preceded in death by two sisters and a brother. They are: Beth Carman Groninger, Marzell Shaw and Ren Groninger.
Friends are invited to join with his family to celebrate the life of Hal Groninger on Wednesday, April 30, 2008, from 4 to 7 p.m. (and after 7 a.m. on Thursday, May 1) at the Johnson-Danielson Funeral Home, 1110 N. Michigan St., Plymouth.
Funeral services for Hal will be held in the funeral home on Thursday, May 1, 2008, at 11 a.m. The Rev. Tom Padberg, chaplain of The Center for Hospice and Palliative Care, Inc., will officiate.
Memorial gifts in Hal’s memory may be made to the First Presbyterian Church, 401 N. Walnut St., Plymouth, IN 46563