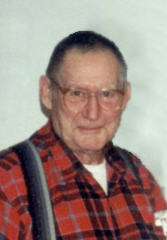 Harlan D. “Ambrose” Schroeder, 76, a lifetime Marshall County resident, living at 3987 Olive Road for the past 59 years, became suddenly ill at home and died of natural causes in Saint Joseph Regional Medical Center, Plymouth, at 1:08 p.m. on Saturday, May 3, 2003.
Ambrose was born in Plymouth on September 23, 1926. He was the son of Lewis S. and LaVange Halt Schroeder.
A 1944 LaPaz High School graduate, he served as a Staff Sergeant overseas with the United States Army in World War II.
On November 25, 1981, in Plymouth, Ambrose and Anna B. (Thomas) Schaefer were married.
An iron worker and a self-employed farmer, he was a member of Local 292 of South Bend.
He loved tinkering with his old farm tractor and working crossword puzzles. He very much enjoyed the presence of his grand and great-grandchildren.
He was a proud and supportive member of the American Legion Post, LaPaz, No. 385, the Plymouth Masonic Kilwinning Lodge No.149 and the Shriners Valley of St. Joe, South Bend.
Ambrose is survived by his wife, Anna, and by two step-daughters: Lynn C. Schaefer, Plymouth and Valarie A. and Michael Scuillo, Coral Springs, Fla. Three grandchildren: John and Tracy Williams; Tim and Kelli Stump and Sarah Stump, all of Plymouth, survive, together with three great-grandsons: Jonathon, Jordyn and Jacob Williams.
A sister, Shirley and Carl Alberts, Plymouth, and two brothers, Don and Erelene Schroeder, Rhinelander, Wis., and Gene Schroeder, Appleton, Wis., survive as well along with numerous nieces and nephews.
Ambrose was preceded in death by his parents, three brothers and a sister. They are: Darrell, Earl and John Schroeder and Marian Cannan.
Visitation with the family will be from 4 to 8 p.m. on Monday, May 5, 2003, at the Johnson-Danielson Funeral Home, 1100 N. Michigan St., Plymouth, Ind. Masonic Memorial Rites will be held at 7:30 p.m. in the funeral home.
Funeral services conducted by the Rev. Paul Mc Bride, a retired Church of the Brethren pastor, will be held on Tuesday, May 6, 2003, at 10:30 a.m. in the funeral home.
Interment will be in Fairmont Cemetery, north of Plymouth, where Military Honors will be accorded him by the LaPaz American Legion Post 385 Honor Guard.
Memorial gifts may be made to the Union North Ambulance Service.