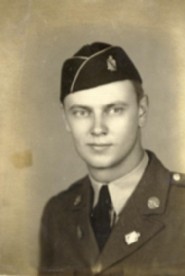 Lifetime Marshall County resident, Harold Clinton Young died unexpectedly from natural causes, at his residence, 806 W. Jackson St., Plymouth, on Monday, June 6, 2005, at 9:35 a.m. Harold was 86-years-old.
He was born in Circleville, Ohio, on June 15, 1918, the son of Clinton B. and Mary K. Eitel Young.
Harold attended Bremen High School.
A veteran of the United States Army, serving in World War II, he was awarded the EAME Theater Ribbon with four Bronze Stars, the American Defense Service Medal, the Good Conduct ribbon and a Purple Heart with one Oak Leaf Cluster. He was a proud member of the Plymouth VFW, Post 1162.
While he was in the service, Harold and Waneta Jane Parcell were married.
He retired from the Bendix Corp., South Bend, where he worked in the aeronautical unit of the Brake Division.
An avid hunter and fisherman, Harold enjoyed farming and had a bountiful flower and vegetable garden. He also enjoyed dancing and playing cards.
Harold is survived by Waneta and their nine children: five daughters and four sons.
His daughters are: Donna (Lowell) Price, Plymouth; Betty Bowling, Nappanee; Mary Bowling Nethercutt, South Bend; Karen ( Roy) Bowling, Plymouth and Nancy Morris, Goshen.
His sons are Ralph (Mary) Young, LaPaz; Clifford (Jacque) Young, Tippecanoe; Roger Young, Nappanee; and Donald (Tabitha) Young, Plymouth.
Twenty-eight grandchildren and 51 great-grandchildren also survive, together with a sister, Virginia (Jack) Julian, Bremen and a brother, Theodore (Lavon) Young, also of Bremen.
Harold was preceded in death by his parents, a sister, Nellie Kuhn and two brothers, Bernard and Robert Young. A grandson and four great-granddaughters have also died.
A gathering to celebrate Harold’s life will be held on Wednesday, June 8, 2005, from 3 to 8 p.m .and continued on Thursday after 7 a.m. in the Johnson-Danielson Funeral Home, 1110 N. Michigan St., Plymouth, Ind. Friends of the family are invited.
Funeral services for Harold will be on Thursday, June 9, 2005, at 11 a.m. in the funeral home. The Rev. Steven J. Resner, pastor of the Calvary Lutheran Church, will officiate.
Graveside military honors at the Pleasant Hill Cemetery, Bourbon, by the Plymouth VFW #1162, will be accorded to Harold.
Memorial gifts in Harold’s name may be made to the American Kidney Fund.