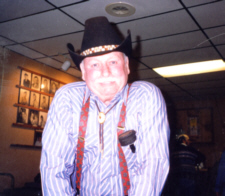 Harold Edward Wilson, 79, 2180 Roy Street, Walkerton, IN., formerly of Harvey, ILL., died of natural causes at 11:50 p.m. in Memorial Hospital, South Bend, on Wednesday, February 18, 2009.
A good husband and father, he loved his grand and great-grandchildren very much and delighted being with them.
Harold was born in McCook, Illinios on June 2, 1929. He was the son of Lee and Pearl Conarro Wilson.
On Christmas Eve of 1948, in the First Christian Church at Harvey, Illinois Harold and Rosemary Waters were married.
An Army veteran in World War II, he then worked for 62 years as a roll grinder for Acme Steel , retiring in June of 1991.
Harold had many interests. A jack-of-all-trades, he was a woodworker and adept in all kinds of building crafts. He loved camping and fishing and was good at plumbing.
He was a member of the Walkerton American Legion Post.
Harold is survived by Rosemary, his wife of over 61 years and by their children: three sons, two daughters, 13 grandchildren and nine great-grandchildren.
His daughters are Christine (Ed) Simon, Portage, IN.: Linda (Mark) Aleman, Stager, ILL.; and Kathleen (Jerry) Jaknbal, Hammond, IN.
His sons are Timothy (Cindi) Wilson, New Lenox, ILL. and Porter (Gay) Wilson, Tinley Park, ILL.
Two sisters, Ann Sager, San Diego, CA. and Velma (Gus) Dreher, Glendale, AZ., also survive.
Harold was preceded in death by his parents, a brother, Roy Wilson, and two sisters, Maxine Byrak and Mabel Hoest.
Friends are invited to share memories and visit with Harold’s family on Saturday, February 21, 2009, from 2 to 6 p.m. in the Johnson-Danielson Funeral Home, 1100 N. Michigan St., Plymouth, Ind.
Funeral services for Harold will commence after visitation at 6 p.m. on Saturday in the funeral home. The Rev. John Branch, pastor of the Plymouth Wesleyan Church, will officiate.
Interment will be at a later date in the Beverly Cemetery, Blue Island, ILL.
In lieu of flowers, memorial gifts may be earmarked for the family.