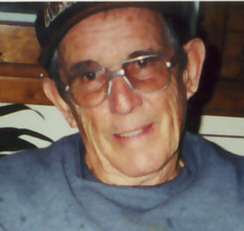 Harold F. “Doggy” Hess, 81, died of natural causes at his residence on Pretty Lake Trail, Plymouth, at 5:51 p.m. on Monday, September 29, 2008.
He was known and respected by all who knew him as a good husband, father, grandfather and great-grandfather. He loved his fellowship at his church and gave support and help to his friends when they were in times of need.
Born in Plymouth on September 30, 1926, Harold was the son of Herman and Vera (Mills) Hess. He lived in Plymouth all of his life.
He graduated from Plymouth’s Lincoln High School with the class of 1945, and joined the United States Army. He was sent to Germany where he was a medic and grave registrar. When he returned home, he trained as an apprentice plumber.
He went to work in the family business, Plymouth Plumbing and Heating.
Harold met Edith Ritenour, a LaPaz farm girl and fell in love. A year later, on February 28, 1948, they were married at a neighbor’s home.
Harold and his family lived at Pretty Lake since 1950. He retired from Thermogas as a gas cylinder delivery man in 1985.
He was a member of the Pretty Lake Trinity United Methodist Church and worked with the West Township Boy Scouts as assistant Scout Leader.
Hard working, he loved being outdoors. He loved fishing, camping and most anything to do with Mother Nature.
He had a great garden that was the envy of the neighborhood. He couldn’t stand to see produce go to waste and enjoyed sharing with others. He also took the time to visit shut-ins.
Harold loved to talk and whistle. He whistled while he worked and enjoyed playing his harmonica.
One of his great passions was the water. He boated or canoed on all area lakes and up in Michigan too.
For ten years, from 1976 to 1986, Harold, his sons and Edith, his wife, directed the officially sanctioned nine-mile Blueberry Festival Paddle Canoe Race.
During the summer, with family and friends, they would clean the Yellow River to make it ready for the canoeists.
Harold enjoyed walking along the water with his faithful companion – a black dog “Midnight” by his side.
He and Edith loved to watch for the arrival of the snow geese at Pretty Lake every winter. There are ducks, geese, heron and deer. A pair of swans show up every once in awhile.
He is survived by Edith, his devoted wife of over sixty years and by their three sons: Leonard “Lenny: (Cathy) Hess: Rodney “Rod” (Sherry) Hess, all of Plymouth, and Gerald “Jerry” Hess and his friend, John carpenter, Houghton, Michigan.
Seven grand children: Rich & Shelly Kovacs, Todd Hess, Jeff Hess, Troy Hess & Heather, Kesha Hess, Amber & Jade Buchanan and Donnie Adams along with 16 great-grandchildren also survive, together with a sister, Carolyn Neff, Granger, Indiana and a step-sister, Pat Kuskye, of Plymouth.
His in-laws would include; Mildred Ritenour, Kenneth & Marie Ritenour and Edna & Merl Swihart.
Harold was preceded in death by his parents, a daughter, Sheryl Guyse and step-mother, Cora Hess.
Visitation with the family and the sharing of their memories of Harold will be on Wednesday, October 1, 2008, from 5 to 8 p.m. and Thursday, October 2, 2008, after 7 a.m. at the Johnson-Danielson Funeral Home.
Friends are invited to celebrate the life of Harold Hess at 10 a.m. on Thursday, October 2, 2008, in the Johnson-Danielson Funeral Home, 1100 N. Michigan St., Plymouth. The Rev. Jim Irwin, pastor of the Pretty Lake Trinity United Methodist Church, will officiate.
Military honors will be accorded Harold by members of the V.F.W. Post 1162 and American Legion Post 27. Burial will follow in New Oakhill Cemetery, Plymouth.
Memorial gifts in Harold’s memory may be made to the Pretty Lake Trinity United Methodist Church.