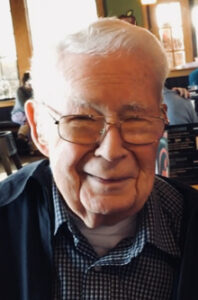 Harold J. â€œJimâ€ Thrall, 93, passed away peacefully in his home with family at his side at 5:39 p.m. on Saturday, October 20, 2018.
Jim was born in Mansfield, Illinois on June 15, 1925 to Rev. Harold L. and Elizabeth (Shriber) Thrall.
Jim enlisted in the U.S. Navy his last year of high school and served as a Pharmacistâ€™s Mate Third Class during WWII. He attended to the troops during the D-Day Invasion on Omaha and Utah beaches in Normandy, France. Jim was honorably discharged on April 8, 1946.
After his discharge, Jim married Joan E. Walker in Galva, Illinois on January 29, 1948. He also attended Illinois Wesleyan University in Bloomington, Illinois and obtained his Bachelorâ€™s Degree in 1950. In 1959, he completed post-graduate studies at Imede in Lausanne, Switzerland. Jim worked for Libbyâ€™s Foods and Nestle for 35 years, ending his career as a group vice president. He eventually retired to Granger, IN in 1994 where he was an active member of Grace United Methodist Church for 20 years. In 2013, he moved to Plymouth, IN to be closer to family and joined Trinity United Methodist Church. He enjoyed reading about American history, politics and business. He loved the Old English Sheep dogs that his family had throughout the years. But mostly, he loved being with his family. Jim is survived by his two daughters, Kathy A. (John) Thiel of Arlington Heights, IL and her children, Kristin Thiel and Megan (Brian) Thiel-Mack, and daughter, Susan E.T. (Don Jr.) Nunemaker of Plymouth and her children, Jennifer (Mark) Honer, Allison (Grady) Emmert and Liga Nunemaker; step-grandchildren: Maria (Dan) Knowlton and Jenni (Brian) Bormes; 3 great-grandchildren, Nathaniel, Margot and Christian; and many step-great-grandchildren.
He was preceded in death by his wife, Joan, on May 17, 2006, his parents, and his sisters, Dr. Elizabeth Henderson and Miriam Foster.
Visitation will be from 11-1 p.m. on Saturday, October 27, 2018 in the Johnson-Danielson Funeral Home, 1100 N. Michigan Street, Plymouth. Funeral services will follow at 1 pm. with Pastor Jeff Stueve officiating.
Burial will be in the Southlawn Cemetery, South Bend, IN with Military Honors.
Memorial contributions can be made to: The Salvation Army, 1934 N. Oak Road, Plymouth, IN 46563, Food Bank of Northern Indiana 702 Chapin Street, South Bend, IN 46601 or St. Jude Childrenâ€™s Research Hospital, 262 Danny Thomas Place, Memphis, TN 38105.