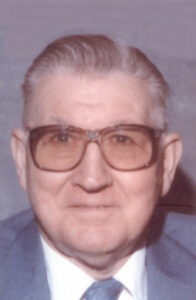 Harold O. Price, Sr., 11627 State Road 17, died of natural causes in Miller’s Merry Manor, Plymouth, on Monday, December 7, 2009.
He was 94 years old.
Harold was born in Bremen, IN., on May 7, 1915. He was the son of William Henry and Grace Merilda Walterhouse Price. He graduated from West High School with the class of 1934.
On February 12, 1936, in Plymouth, he and Dorothy M. Crowel were married. A lifetime resident of Marshall County, Harold was a respected and accomplished carpenter. At one time he worked for Reese Construction, later Todd Flora Construction. His enjoyment in life was being a simple carpenter. A member of the Plymouth Masonic Lodge 149 and the St. Joe Valley Scottish Rite, he was a dedicated member of the Pretty Lake United Methodist Church and served as a Trustee and on the Administrative staff.
Harold is survived by two sons: John A. and Betty Price, Wheatland, WY., and Harold O. and Linda Price, Denver, CO
He is also survived by three grandchildren Kurt Price, Melissa Bristol, and Wayne Price and three great grandchildren Coan Price, Zachary Bristol, and Jackson Bristol. Life long friends Bonnie and Allen Keller of Argos, along with several nieces and nephews survive as well.
He was preceded in death by his parents and his wife. Friends are invited to share their memories of Harold with his family on Friday, December 11, 2009, from 9 to 11 a.m. at the Johnson-Danielson Funeral Home, 1100 N. Michigan St., Plymouth. A Masonic Service will be held at 11 a.m., followed by a funeral service for Harold, officiated by Rev. Jim Irwin, pastor of the Pretty Lake Trinity United Methodist Church.
Interment will be in New Oakhill Cemetery, Plymouth.
Memorials in Harold’s memory may be made to the Pretty Lake Church, 8985 State Road 17, Plymouth, Indians, 46563.