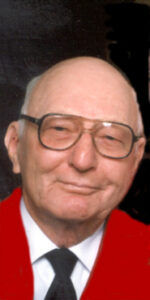 Harold Price, 89, of 5200 8th Road, Bourbon, Ind., died at 4:55 p.m. in the Bremen Health Care Center, Bremen, Ind., on Wednesday, September 10, 2003.
Born on November 12, 1913, in the home later he lived in, he was the son of Charles Nelson and Lota Susan Bell Price.
Harold graduated from Bourbon High School in 1932.
On New Year’s Eve, December 31, 1935, in the Bourbon parsonage of the United Brethren church, Harold took Jessie Walterhouse as his bride. Jessie, Harold’s wife of 67 years, survives his death.
Harold was a farmer for 47 years, retiring in 1979. He was a member of the Farm Bureau and had been on the Advisory Board for Bourbon Township, having been appointed once and elected once.
He liked to read in his spare time and enjoyed going to the fairs.
In addition to Jessie, Harold is survived by a son, Charles E. (Judy) Price, Brownsburg, Ind.; a daughter, Nancy Price of Bremen; eight grandchildren; three step-grandchildren; 20 great-grandchildren and eight step-great-grandchildren.
A sister, Elizabeth Berry, Bremen, survives as well.
He was preceded in death by his parents; four brothers: Mark, Ralph, Carl and Max; a sister, Lois and a daughter, Shirley Bailey Walters.
Friends are invited to come and celebrate Harold’s life from 4 to 8 p.m. on Saturday, September 13, 2003 at the Johnson-Danielson Funeral Home, 1100 N. Michigan St., Plymouth, and on Sunday at the Church, one hour prior to the services. Funeral services for Harold will be held at 2:00 p.m. on Sunday, September 14, 2003,in the Country Church, where he was a member, St. Rd. 331 N. Bourbon, Ind. The Rev. David Gould, pastor of the church, will officiate.
Burial will be in Mount Pleasant Cemetery, Bourbon, Ind.
Memorial gifts in Harold’s memory may be made to the Salvation Army.