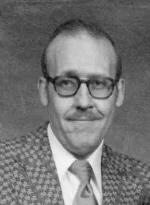 Harold R. Krou, 61, who resided with his brother Bob at 1218 N. Plum Street, Plymouth for the past 30 years, has died of natural causes in the St. Joseph Regional Medical Center, South Bend, on Monday, November 26, 2001 at 3:15 a.m. A lifetime resident of Plymouth, Harold was born the son of Edward C. and Edna D. Dague Krou on November 2, 1940 in Plymouth. At the age of four, Harold’s father dubbed him with the family nickname, “Pal” which stuck with him to this day. He graduated from Plymouth High School with the Class of 1959. Over 34 years ago Harold went to work for the Weidner family at Pilgrim Farms and later Dean’s Foods having experience in most production positions. Harold was a longtime member of the Plymouth First United Church of Christ. In his youthful day Harold enjoyed family outings to Dixon Lake and Maxinkuckee. To his brother Bob, Pal was a great brother and friend that found pleasure watching T.V. , Sports, working crossword puzzles and taking short trips.
Harold is survived by his brother Robert W. Krou of Plymouth, three sisters; Rosemary M. and Edward Ozio of Lawton, Oklahoma, Esther “Irene” Weimer of Mishawaka, and Martha “Katherine” Hanners of Macon, Georgia. Several nieces and nephews also survive. Harold was preceded in death by his parents, two brothers, Roland C. and Donald L. Krou and infant sister Ethel E. Krou. Friends may call at the Johnson-Danielson Funeral Home on Wednesday, November 28, 2001 from 4 – 7 p.m. and one hour prior services in the church. Services will be held in the Plymouth First United Church of Christ, 321 N. Center Street at 11 a.m. Thursday, November 29, 2001, pastor, Rev. Dr. David Moffett-Moore will officiate. Burial will follow in the Oakhill Cemetery, Plymouth. Preferred memorial gifts in Harold’s name may be made the church.