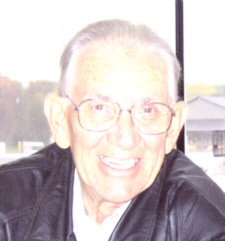 Harold R. Ringer, 80, Lakeville, IN., died at his residence on Monday, March 9, 2009 at 10:30 a.m.
Harold was born in South Bend on June 14, 1928. He was the son of Ora A. and Inez Dreibelbis Ringer.
Harold and Thelma Jeanne Finney were married in Culver on June 13, 1948. They had lived in Lakeville all of their married life.
He was employed by Studebakers and Acme Filter Service in South Bend for many years.
Harold is survived by his wife and their two sons, Mark (Sheryl) Ringer of Lakeville and Eric Ringer of Mishawaka and one daughter, Joyce (Ray) Beja, Bremen.
A brother, Arthur ( Ruth) Ringer, Plymouth and grandchildren: Korrine ( John) Britton, Williamstown, NY: Aron Ringer, Ryan (Allison) Ringer both of Greer, SC., and Derek Ringer of South Bend, Josh Ringer of Bloomington and their mother, Diana.
Great-grandchildren Victoria, Noah and Evangelyn Britton also survive.
Harold was preceded in death by his parents, and two brothers and their wives: Don (Louise) Ringer and Carl (Mary) Ringer.
Friends are invited to share their memories and celebrate the life of Harold with his family on Wednesday, March 11, 2009, from 4 to 8 p.m. and on Thursday, March 12th, after 7 a.m. in the Johnson-Danielson Funeral Home, 1100 N. Michigan St., Plymouth.
Funeral services for Harold will be at the funeral home at 11 a.m. on Thursday, March 12, 2009.
The Rev. Dr. Bud Steadman of the Community Baptist Church, South Bend, where Harold attended, will officiate.
Burial will be in Oak Hill Cemetery, Plymouth.
Memorial contributions in Harold’s memory may be made to the Community Baptist Church or to The Center for Hospice and Palliative Care, Inc.